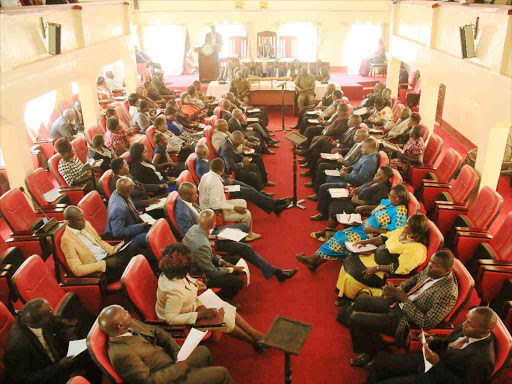 The Kakamega assembly has now sought services of legal experts to help it recover more than 250 million from past MCAs who defaulted repaying their car and mortgage loans.

In an advert in the local dailies yesterday, assembly clerk Patrick Kamwesser called for bids from top lawyers to assist in the recovery of the money.

Of the Sh440 million issued to MCAs in car loan and mortgage facilities in 2014, only Sh190 million has been recovered.

The two loans are supposed to be a revolving fund and the default by MCAs to repay has crippled facilities for the current ward representatives.

In mid-October, angry MCAs locked the doors to speaker Morris Buluma, finance director Laban Atemba and Kamwesser’s offices to protest against the assembly leadership’s failure to address their welfare.

Of the 89 ward representatives in the assembly, only 15 have been issued with mortgage facilities due to difficulties in recovering the defaulted amounts.

Kamwesser said the assembly has decided to take legal action against the defaulters to compel the them to honour several demand notices.

Failure by the assembly to issue mortgage facilities has triggered a legal suit by three MCAs. Walter Andati, Jackline Mwakha and Josephat Mwasame want the court to compel the assembly to fulfil its mandate.

The MCAs say in their petition that Kamwesser, Buluma and Atemba failed to put in place proper mechanisms to collect the deductions from past MCAs and ensure the fund is revolving.

The petitioners want the court to make a declaration extending the time for repayment for MCAs, who have not received their mortgage facility due to the delay in disbursement of the loans.

They also want a declaration that the assembly leadership acted in discriminatory manner and infringed on their rights by failing to provide them with three staff members and an office as elected MCAs.

Last year in November, the former MCAs were asked to make alternative arrangements for repaying their car loans and mortgages.

This followed the Court of Appeal’s decision quashing ward representatives’ bid to earn Sh8 billion in salaries until March 2018.

Kamwesser had said the MCAs would have to forfeit their gratuities to settle part of the balances.