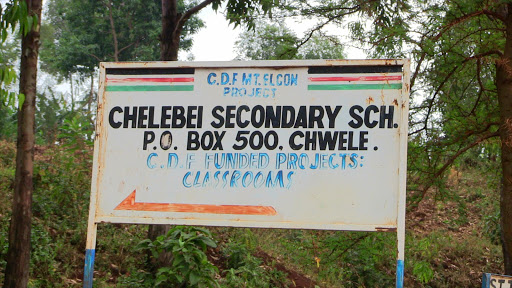 EXPECT DROPOUTS: A signpost of Chelebei Secondary School where 20 girls were found pregnant.

The students tested positive after a routine check by the school administration last week.

Deputy principal David Emachar said the test was done after the students reported back from the midterm break.

He said the pregnancy test is routinely done when the girls return to the day school for a new term or from midterm breaks.

“We were shocked when the tests revealed that 20 of our students are pregnant,”

said they counsel the students regularly, warning them against engaging in sexual intercourse.

He said it is unfortunate when such cases come up after school breaks.

Emachar said parents do not support their efforts and do not closely monitor their childre's movements and activities.

“We have tried our best through guidance and counselling sessions and it is unfortunate that such still occur. We ask the parents to come and support our efforts by monitoring the children's movements,” he said.

Parents, however, accused the school administration of not helping the girls.

One parent, who declined to be named, said the school has failed in its duties to guide the students.

He said the school should be more strict in monitoring students, as parents are busy fending for their families.

“We are also doing our part to monitor the children, but if teachers did their part we would not have these pregnancies,” the parent said.

the girls walk long distances to and from school daily, and are waylaid by boys from neighbouring schools and other youths from the area.

He said the school should build a dormitory for the students.