Safe pesticide use campaigns bring back hope for mango farmers who were on the verge of uprooting the crop. 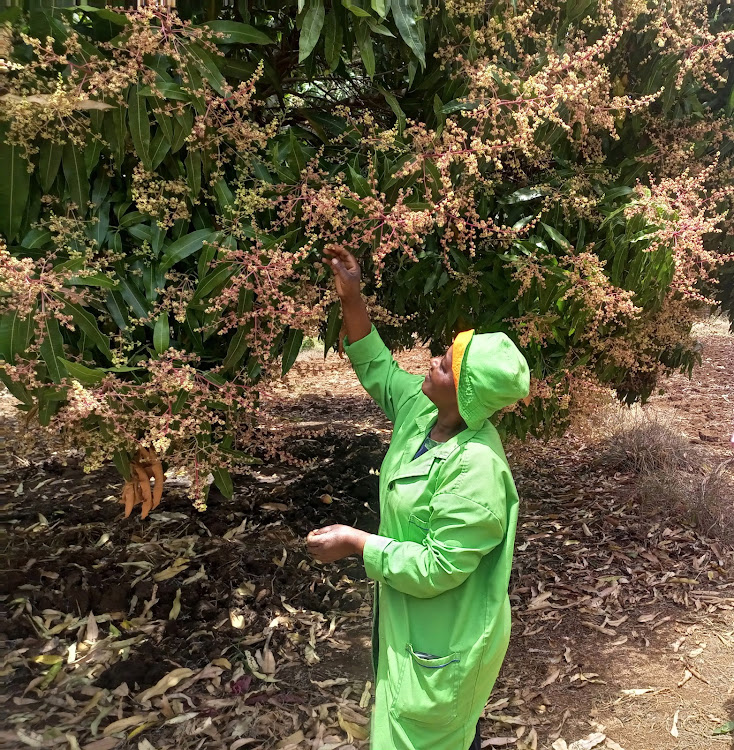 PESTICIDE USE Agnes Kariuki, a mango farmer in Mbeere inspects her fruit tree which is at the flowering stage.
Image: LOISE MACHARIA

Agnes Kariuki, a fruit farmer in Mbeere South, Embu County was on the verge of cutting down her mango trees in 2018 due to frustrations occasioned by crop diseases and pests.

The problem in this semi-arid county and several other mango-growing counties was aggravated by climate change which not only affects the population size of pests but also accelerates their spread and distribution of crop diseases.

Agnes’ contemplation to quit mango farming came after years of frustration that deteriorated following a self-imposed export ban by Kenya in 2014 due to an infestation of fruit flies.

The country feared being blacklisted due to a massive infestation of fruit flies which are among the quarantined pests in the European Union (EU).

The ban would continue for close to a decade until 2021 when the Kenya Plant Health Inspectorate Service (Kephis) lifted it following concerted efforts by different organisations which include international organisations such as the EU through United Nations Industrial Development Organisation (Unido).

Agnes narrates how farmers encountered massive losses as their fruits fell and rot on their orchards before maturity due to pests.

“The phenomenon always started at the onset of the fruiting stage with the flowers falling off the trees, the immature fruits would also fall while the few that held to maturity were infested by worms and rust,” she says.

She regrets how buyers from different parts of the world would visit the area and leave empty-handed because they could not export the mangoes to Pest Free Areas (PFAs) and Areas of Low Pest Prevalance (ALPPs).

“Some of my neighbours cut down their mango trees and opted for other subsistence crops and watermelons but I chose to leave the trees intact even as I started growing food crops,” she adds. 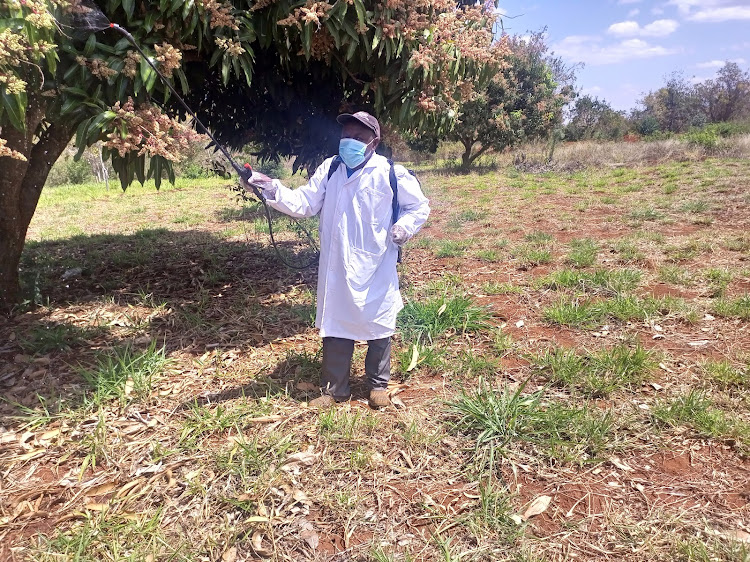 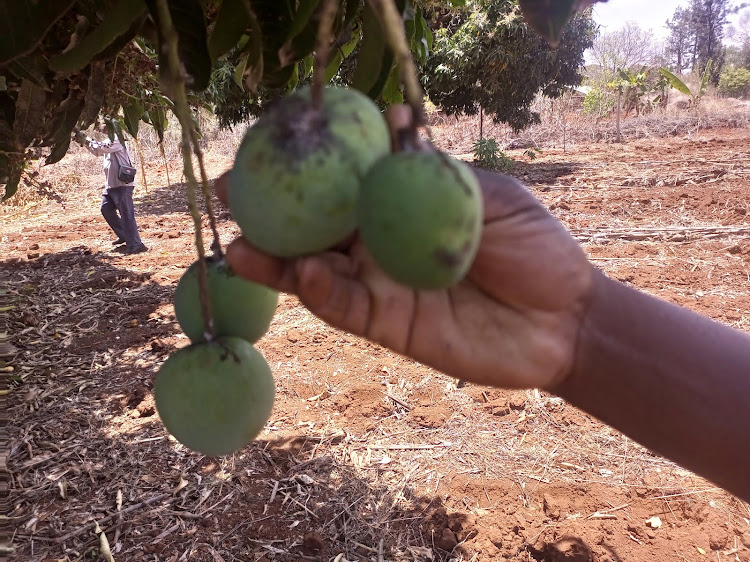 PESTICIDE USE A mango farmer in Embu County displays some of his disease infested fruits due to poor pest control.
Image: LOISE MACHARIA

Agnes is reaping from her decision to keep the mango trees as she says that the tide has changed after several training on proper pesticide use and pest control systems by EU funded Market Access Upgrade Programme (MARKUP).

The farmers were taught the safe agrochemicals to use which are less harmful and acceptable in the international premium markets, and the intervals at which to pray Integrated Pest Management systems such as inter-cropping the fruit trees with pungent plants to keep away insects.

“I have learnt when to protect the plants from frost and the right pesticides to spray during the flowering or fruiting season,” she says.

Through the knowledge gained after attending several workshops, Agnes is a Trainer of Trainers and has been helping farmers manage their orchards.

“I have to share the knowledge with my neighbours through the community groups and even church meetings so that they can also have a bumper harvest, we aggregate the produce and access the market together,” she adds.

According to Agnes, the farmers are reaping all year round because some of the fruit of their trees is during the off-season.

During the off-season late last year, Agnes made sales of more than Sh10,000 and she is expecting the figure to triple now that mangoes are in season.

On clean planting materials, she advised fellow farmers to get seedlings from certified fruit tree nurseries instead of using their own rootstock on which they inset scions.

“Rootstock is as important as the scion and certified fruit tree nurseries pick the best and fast-maturing varieties like Apple Mangoes.

Job Njiru, another TOT based in the Rwika area of Gachoka ward in Mbeere says mango farmers used to suffer great losses before the training by MARKUP because their trees used to abort at the flowering stage. 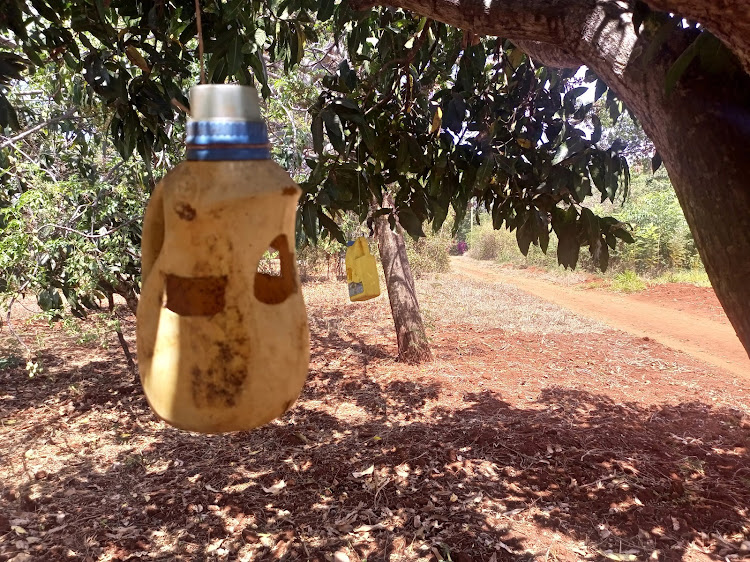 “Almost all the flowers would fall and a tree that produces more than 500 fruits would carry about 50 or fewer mangoes to maturity,” he says.

Njiru says many farmer groups have been trained and can take care of their mango trees accordingly starting from manure application, spraying acceptable pesticides and top-dressing in ways that are acceptable in the global Good Agricultural Practices (GAP).

He confesses that he had a bumper harvest in the last season and the current one thanks to the education and guidance of experts from MARKUP which include media campaigns through newspapers, Radio and TV programs and social media platforms.

He adds that individual farmers also get Short text Messages (SMS) through their phones reminding them when to spray according to the seasons and stages of their crop.

Whenever we have farmers’ group meetings, we educate and remind each other of the good practices because we have experienced a great economic change, and our fruits are acceptable in local and international markets,” says Njiru.

Njiru also uses homemade pest trappers to complement pesticides to ensure that his product does not have high levels of chemical residue.

Christine Mulindi, Junior Project Assistant at Unido says MARKUP was involved in the pesticide campaign dubbed ‘Dawa Bora, Mazao Bora’ to ensure that food products that get to the market are safe for human consumption.

She says the project is in 12 counties in Nyanza, Western, Eastern and Rift Valley regions with the main message being the proper choice and use of pesticides.

“Farmers are encouraged to read the labels of the pesticides when they buy, ensure they are licensed and authorized for use in Kenya and follow the instructions to the letter while applying them,” adds Mulindi.

She advises farmers to adhere to the spray intervals which is very important for higher and safer produce which is acceptable in high-premium markets in Kenya and beyond.

She said the MARKUP project has reached approximately 6 million farmers through media campaigns and workshops, and social media groups.

The project is being implemented by Unido.

Mulindi urges farmers and agro-dealers to take responsibility and ensure that the food they produce is safe because a healthy nation is a wealthy nation.

She says if agro-dealers strictly stock farm chemicals authorised for use in Kenya, those importing banned herbicides and pesticides would have nowhere to sell their illegal products.

Post a comment
WATCH: The latest videos from the Star
by LOISE MACHARIA
Rift Valley
24 January 2023 - 22:06
Read The E-Paper