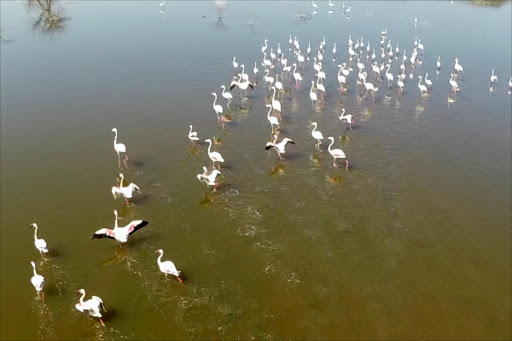 Bird experts and conservationists indicate that human induced threats such as pollution of wetlands have aggravated an already worse situation for the birds.

This is despite several East African states having domesticated international treaties on protection of migratory species as part of concerted efforts to save flamingos, which sustain tourism besides stabilising ecosystems.

According to Kenya Wildlife Service senior researcher Joseph Edebe, increased volumes of water at Lake Nakuru and Bogoria have destroyed large portions of the birds’ habitats, leading to a decline in their numbers.

Edebe said that unpredictable weather patterns have disrupted migration of flamingos from Tanzania to Kenya, adding that curbing lake pollution and increased public education is vital to strengthening protection of the migratory birds.

The researcher said that the increase in water levels had reduced the alkalinity of the lakes and, as a result, weakened their capacity to sustain blue-green algae that flamingos feed on.

In January and July every year, KWS, National Museums of Kenya, Kenya Wildlife Nature Kenya, Site Support Groups and volunteers partner in carrying out a census of water birds.

Between 2008 and 2015, statistics from the census, particularly in Lakes Nakuru and Bogoria, confirmed a declining trend on lesser flamingos, while the population of greater flamingos remained stable.

Lesser flamingos totally depend on blue-green algae as food, whereas greater flamingos feed on a wider variety of food within the alkaline lakes.

“In 2010, more than one million lesser flamingos were recorded in total in the water bird counts but in 2014, only 5,000 were recorded,” the report states.

In 2017, the Status of Key Biodiversity Areas report said that the overall status of the sites, which included major flamingo feeding sites, were unfavourable. Lakes Nakuru and Bogoria were among the 38 sites that recorded unfavourable status during the monitoring period.

“Flamingos are not adapted to wading in deep waters and as the lakes swell they relocate to shallow ends, which sometimes are too bushy, or search for other spots,” Edebe said.

In 2021 hundreds of flamingos got trapped in prickly Mathenge weeds that grow on part of the shores of Lake Bogoria. The flamingo population at the lake then was estimated at 300,000.

The senior researcher said that “flamingo food thrives in brackish or saline water and that is why they prefer the lagoons which exhibit the same features. Over time, the lake waters have reduced in salinity as a result of a large inflow of fresh water.”

The expert said population trends have experienced a sharp drop in breeding sites in Tanzania and feeding grounds in Kenya.

Official statistics and records reveal that the migratory birds’ numbers have been dwindling at two major habitats, from 2011, when water levels started to rise sharply.

A January 2021 bird count indicated that there were 6,000 flamingos in Lake Nakuru, with an additional 4,000 birds recorded within sewerage treatment ponds nearby – a sharp decline from an estimate of 850,000 in the year 2000.

Records from Bird Life International show that populations at Lake Natron, the largest breeding site in East Africa, registered a dramatic decline in numbers between 2018 and 2021.

Due to rising water levels no breeding was recorded in Lake Natron in 2020 and 2021, an occurrence that was also reported in the Kenyan lakes.

Nature Tanzania director Mr Emmanuel Mgimwa said that the natural dynamics and change in climate at the lake basin, and beyond, appear to be the main reason for the fluctuation in lesser flamingo numbers in the past two years.

“Torrential rains at the end of 2019 and early 2020 resulted in water levels rising at Lake Natron. Flamingos are not able to feed in waters beyond 80cm of depth. Furthermore, the increased water diluted the waters disrupting the balanced physical-chemical variables,” Mgimwa said.

BirdLife International Africa Policy and communications coordinator  Ken Mwathe said that when numbers are low in Lake Natron, it affects the population of those in Kenya.

He rooted for regional collaboration to mitigate against the challenges, adding that there have not been comprehensive data to indicate the precise population of the birds in the region.

“There is a need for regional collaboration to deal with challenges flamingos encounter in East Africa from Kenya, Tanzania and Ethiopia. An East Africa Flamingo Action Plan should be formulated to guide on the needed intervention. Presently, each country is working on a different action plan yet these challenges can be handled as a region,” Mwathe said.

She said that the government has focused on public awareness campaigns, evidence-based research and pollution mitigation in large water bodies as part of efforts to boost conservation of flamingos

Paul Gacheru, a bird expert at Nature Kenya, said that the migratory flight path for the flamingos should be protected to avert encroachment while engaging local communities to conserve wetlands.

“Power lines and the killing of the birds along their migratory routes is one of the biggest threats to their existence. These birds either die from impact with the cables, subsequent impact with the ground or resulting injuries,” he said.

Gacheru further said the country should leverage some policy and legal instruments, reconfigure infrastructure development in order to minimise threats to flamingos and other iconic migratory birds.

• The birds have migrated from Lake Nakuru, Magadi, Amboseli, Elementaita and Logipi. • Global warming, drought and caused by climate change and ...
Counties
2 months ago

Rising water levels have led to submergence of nearly all riparian land, destruction of crops and structures
Counties
1 year ago

Human activities have led to more flooding, which increases siltation in the lake.
News
11 months ago
Post a comment
WATCH: The latest videos from the Star
by KNA
Rift Valley
23 January 2023 - 21:00
Read The E-Paper