DETECTIVES ON THE HUNT 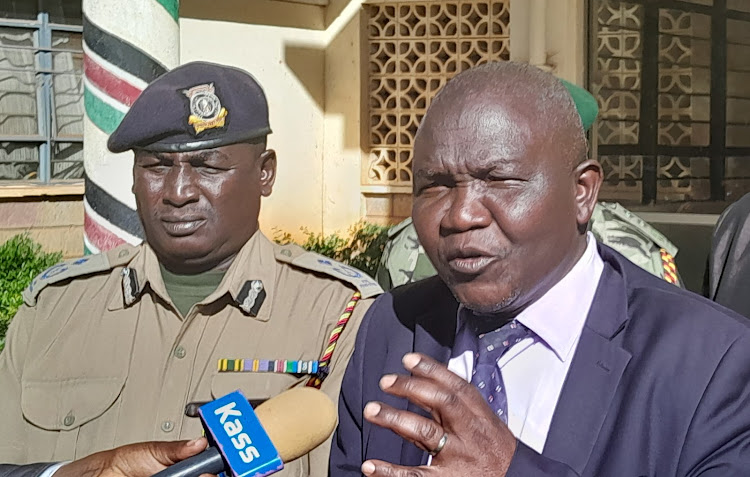 DCI detectives in Eldoret are still searching for a gang who attacked and robbed a police officer of his AK47 rifle loaded with 30 bullets.

The officer sustained serious head injuries— a deep cut on the back of his head, injuries on the forehead, tongue and left kneecap. He is still admitted at a hospital in stable condition.

The incident occurred on Saturday morning as Uasin Gishu DCI boss Peter Kimulwo said they were still trailing the suspects.

“Our officers are on the ground and we will get those involved,” Kimulwo said.

The incident has sparked off insecurity fears in the town where police have been fighting to tame rising crime incidents in the last month.

Police fear the stolen weapon will be used for robbery and may leave a trail of injuries or deaths but Kimulwo said special teams had been deployed to arrest those involved and recover the weapon.

The attacked officer said he was walking home with the weapon after a night shift when the incident happened at about 5 am.

The officer is attached to the Critical Infrastructure Police Unit, Ainabkoi subcounty.

He said he was alone from guard duties at county Yard- B near  Eldoret Coca-Cola factory where he was guarding with another officer when he was attacked.

The assailant disappeared into darkness to an unknown destination towards Eldoret GK prisons direction, the officer told police.

County commissioner Dr Eddison Nyale who was informed of the incident urged members of the public to share information that may lead to the arrest of the suspects.

“We will not sleep until we bring them to book as soon as possible," Nyale said.

Nyale said they had also recovered a gun that had been used in most criminal incidents in the region.

The county security team has pledged to conduct more patrols in the region to curb crime.

Dr Nyale warned boda boda riders who work with criminals that tough action would be taken against them.

“We will consider such boda boda riders as criminals and deal with them as such,” he said.

A new police commander Moses Mureithi took over the county replacing Ayub Gitonga who was transferred a month ago.

Uasin Gishu Governor Jonathan Bii and Women Representative Gladys Shollei have also raised alarm over rising insecurity in the area and alleged that some officers could be involved in robbery incidents.

“We will not accept that to continue and we urge the new police chief to act immediately and ensure that action is taken against the criminal gangs operating in this region,” Bii said.

However, Nyale, denied the allegations by Bii and Shollei, saying those arrested were civilians who had been using illegal arms to terrorise residents.

They struck Samrose Grill Bar minutes after 2am, beat up and left for dead night guard Sonton Emoni.
News
2 weeks ago

Ojiro says some have been maimed, others being held at a social hall
Counties
1 month ago
Post a comment
WATCH: The latest videos from the Star
by BY MATHEWS NDANYI
Rift Valley
22 January 2023 - 22:00
Read The E-Paper