He spoke ahead of President William Ruto's tour of the county scheduled for Friday. 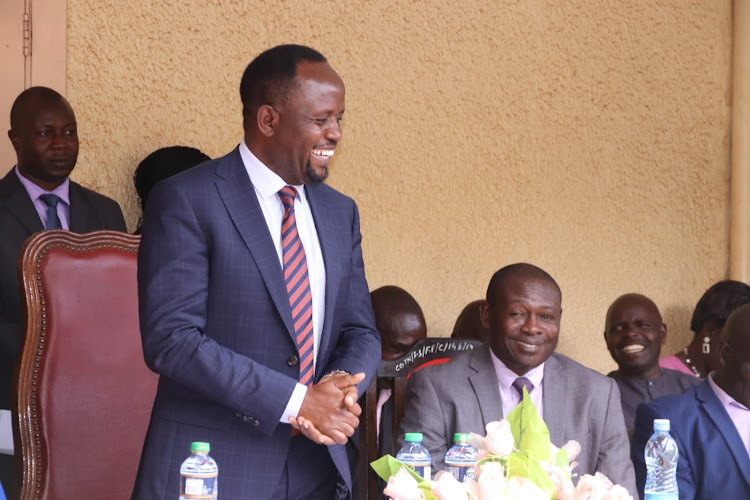 Trans Nzoia Governor George Natembeya on Wednesday affirmed his commitment to working with President William Ruto in his bid to enhance development in the county.

Speaking to local radio in the county, Natembeya said he is only focused on developing the county hence the need to work with leaders across the political divide.

"I only have one agenda, and that’s developing my county and ensuring that the living standards of our people are upscaled. For that reason, I am ready to work hand in hand with the national government and other leaders. I want to see that we change the story of Trans Nzoia, for the better” he said.

He spoke ahead of President William Ruto's tour of the county scheduled for Friday.

Governor Natembeya said his administration would front a number of issues that should be addressed by the national government urgently.

These include the construction of roads, squatters’ problems, and the issuance of land title deeds.

On health services, he said that he had already initiated talks with the national government.

He said these discussions would see the newly commissioned county teaching and referral hospital equipped to assist residents in getting quality health care at the level 5 facility.

He revealed that the facility needs more than 2 billion shillings for equipment to enable it to function.

The amount, he added was above the county funding capacity.

To boost economic activities in the county, the governor revealed that plans are already in place to expand Kitale town.

He said the prison and forest land will soon be handed over to the county government to be used for the expansion program.

He added that his administration is also working with the national government to ensure that a university that focuses on agriculture is established.

"Such facilities would not only help boost the county's status in terms of education but also create other economic opportunities in housing and agriculture," he said.

The governor added that he will also initiate talks with the national government to ensure that residents are connected to clean piped water from the two water towers of Mount Elgon and Cherang’any which are located in Trans Nzoia.

The Suam border point, he said, will soon be opened to help boost cross-border trade between Kenya and her neighbour Uganda.

"We will also seek the assistance of President William Ruto so that we get funding to buy more land to construct Suam border Town," he said.

To boost trade in the county, the governor revealed that his administration had set aside Sh100 million for the NAWIRI kitty.

He said the fund would assist traders to enhance their businesses.

Natembeya said his government would ensure that all bright but needy students from underprivileged families are given the support they need.

He said that he had already set aside 100 million for the bursary kitty.

In addition, his government has also launched a feeding program in all ECDE centres across the county to increase enrollment and ensure quality learning.

Through the department of health, he said his administration would give stipends to health workers and help register 70,000 people who will benefit from the NHIF coverage

He said he is working with members of the county assembly to ensure that all health facilities across the county are equipped with medical supplies.

He said 100,000 farmers have already registered and they will benefit from the subsidy initiative.

Soon, he said, he would have a meeting with the police county commander in order to address the issue of harassment claims by the Boda Boda operators.

The governor assured Kitale residents that his government would ensure that Kitale is cleaned and security enhanced.

Post a comment
WATCH: The latest videos from the Star
by DAVID MUSUNDI
Rift Valley
18 January 2023 - 19:53
Read The E-Paper