• The 2,000-bed capacity Multi-Specialty Moi Teaching and Referral Hospital (MTRH) will be set up on 200 acres already set aside in Kiplombe, Eldoret. 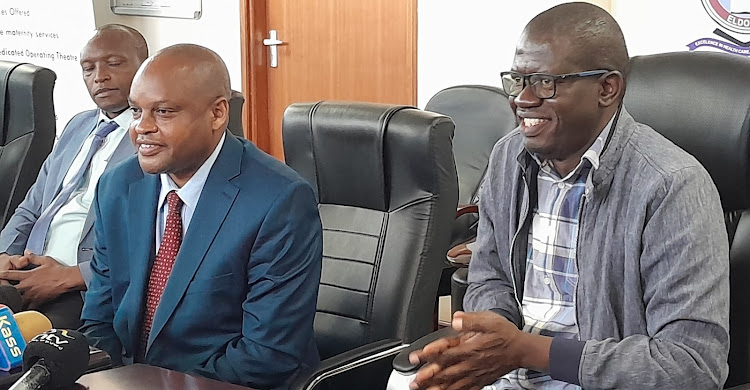 The Kenya Medical Practitioners and Dentists Union has backed the government's plan to build a Sh20 billion national referral hospital in Eldoret.

The 2,000-bed capacity Multi-Specialty Moi Teaching and Referral Hospital (MTRH) will be set up on 200 acres already set aside in Kiplombe, Eldoret.

“We fully support the plan for the new hospital because we know it will help to enhance healthcare for Kenyans, improve our medical research programmes, create job opportunities and enhance our training programmes,” the medic said.

Dr Ambuka told off Minority leader Opiyo Wandayi, who a week ago said Azimio was opposed to the project, fearing that it would be turned into a cash cow for some individuals. Wandayi had said the same project was shrouded in mystery and lacked openness since it was suggested during retired President Uhuru Kenyatta's regime.

The project had started but was shelved during Uhuru’s regime. It was put on hold due to financing challenges.

“We urge that such a serious healthcare issue should not be politicised but instead all our leaders should look at it positively and suggest where improvements can be done instead of wholesome rejection of the project," Dr Ambuka said.

MTRH chief executive officer Dr Wilson Aruasa said the actual cost of the project will be determined upon national tendering. However, he said plans for the project were on course.

Details of the project are part of what was discussed between Health CS Susan Wafula, Dr Aruasa and Uasin Gishu Governor Jonathan Bii when the CS visited the region last week.

Governor Bii said once completed, the new hospital will allow the county to take over the current MTRH as a county referral hospital.

“It will also be an added advantage to our town that is gearing for elevation to city status because we will then have the best medical facilities to handle all needs of our people and even foreigners,” Bii said.

CS Wafula assured that the project was back on course and would help to enhance medical tourism, medical training and research in the region and the country.

Governor Bii urged residents to use county health facilities instead of causing congestion at MTRH with minor ailments.

“Our people don’t have to travel all the way to MTRH to seek treatment for minor ailments because they think county hospitals have no capacity. We have transformed services in our hospitals to the best levels,” Bii said.

Bii spoke after he signed a Sh427 million healthcare deal in which the Israeli government will help improve services in county facilities.

The opposition argued that the project has been shrouded in darkness raising many questions on the intent.
News
4 weeks ago
Post a comment
WATCH: The latest videos from the Star
by BY MATHEWS NDANYI
Rift Valley
15 January 2023 - 21:00
Read The E-Paper