Apus and Apua, aged 13 and nine, were on brink of death and could not walk or talk due to hunger 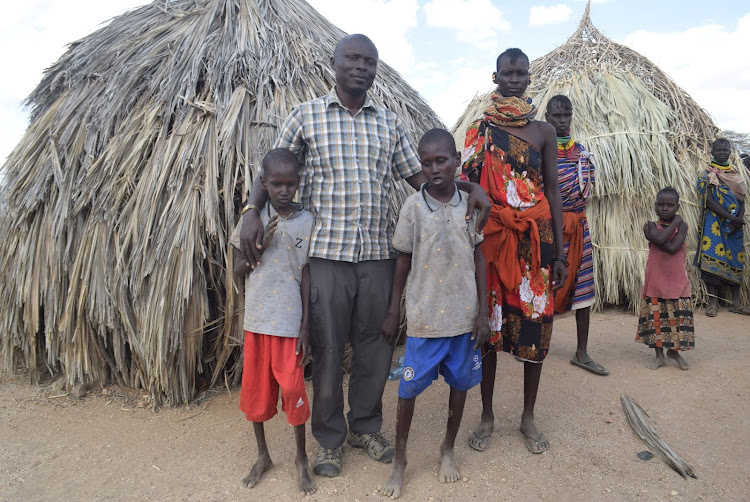 Apus Matet and Apua Matet, aged 13 and nine, could not walk or talk, they looked emaciated and on brink of death due to drought and starvation.

Apus and Apua had gone for three weeks without eating pushing them to the verge of death.

Turkana administration says drought situation is at alarm stage in the county and has affected nearly 800,000 residents with Global Acute Malnutrition rate rising to 34.8 per cent.

The brothers could not talk, walk or stand on their own but thanks to efforts of well-wishers and county government for provision of food and medical support, they are now better.

“We have seen tremendous improvement of Apus and Apua, they could not stand or walk but now they can stand and walk on their own,” said Abdul Wamala a businessman in Turkana.

Wamala, the owner of Kakumatt Supermarket thanked the efforts of well-wishers for providing support for the boys ravaged by drought.

He urged well-wishers not to only to wait for the situation to get worse before helping, saying the entire county is affected by drought and starvation.

Wamala pledged to educate the two boys up to the university level to help them and the community.

“I urge the partners and government to come up with solution, not just temporary solution but one that can withstand time. The county needs a lot of effort to stop recurrence of drought, people are dying because of lack of water and food.”

“I’m very grateful for the well-wishers who have donated and the journalists who highlighted the plight of boys. “I am very happy to find the two brothers who were severely malnourished are jovial and able to walk, so what next? I will take them to school,” he said.

He said he will ensure the two regain their health and will take the responsibility to educate them up to the university level.

Their mother Nakito Matet, who has two other children,  thanked the efforts of government and well-wishers for provision of food and medical aid to her children who were on verge of death.

“This the worst drought we are experiencing, I had no food to feed my children leading to their poor health condition but I thank the journalists who highlighted the situation to bring in the well-wishers for help,” she said.

She said her children could not walk or talk but now they are recovering well.

Matet appreciated Wamala’s initiative to educate her children saying it will relieve her from struggles.

Josephat Aupe, a resident in Kakale urged the well-wishers to continue supplying food items to the families affected by drought and famine.

“The drought and starvation has affected families, it’s my appeal for government and humanitarian agencies to roll our food distribution, cash transfer and livestock off-take programmes to cushion residents,” he said.

According the health report seen by the Star, in the last one month, 449 children out of 605 under five have been admitted in Kangalita dispensary Integrated Management of Acute Malnutrition programme.

More than 40,000 pastoralists from Turkana West and Loima subcounties have moved with their livestock to Kobebe
Counties
3 weeks ago

Governor says drought situation is at alarming stage and has affected nearly 800,000 residents in Turkana
Counties
3 weeks ago
Post a comment
WATCH: The latest videos from the Star
by HESBORN ETYANG Correspondent, Turkana
Rift Valley
15 November 2022 - 22:00
Read The E-Paper