If approved by the county assembly Geoffrey Korir will head the Sports, ICT, Gender and Youth docket

Kericho Governor Eric Mutai has nominated a person living with disability as a chief officer in one of the executive dockets.

If approved by the county assembly this week, the nominee, Geoffrey Korir will head the sports, ICT, Gender and Youth docket.

Korir currently works with the National Treasury in Nairobi.

His nomination comes at a time when a majority of PWDs were complaining of being discriminated against in top-level appointments by the government.

Recently, the PWDs complained of being short-changed by the county political wing after one of their own nominee to the county assembly was replaced.

Speaking to the press at Comfort Restaurant on Saturday, six PWDs hailed the governor for taking a bold step to nominate one of their own.

They told the vetting committee not to reject the nominee the moment his name lands for vetting at the assembly.

“We are still nursing the frustration we endured when one of us was struck off the list of nominees for the county assembly two months ago,” chairman of the PWDs in Kericho county Julius Langat said.

"We thank the governor for pushing for the nomination of Geoffrey Korir to join the executive."

Langat said Korir's appointment will be historic in Kericho to have one of the executive dockets headed by a PWDs.

Another PWDs at the meeting Benjamin Koech said Korir's appointment will open the window for unexploited sports talents among PWDs.

“It's in the executive where matters touching on the PWDs had been overlooked due to lack of representation but with Korir now awaiting vetting that may never happen again," Koech said. 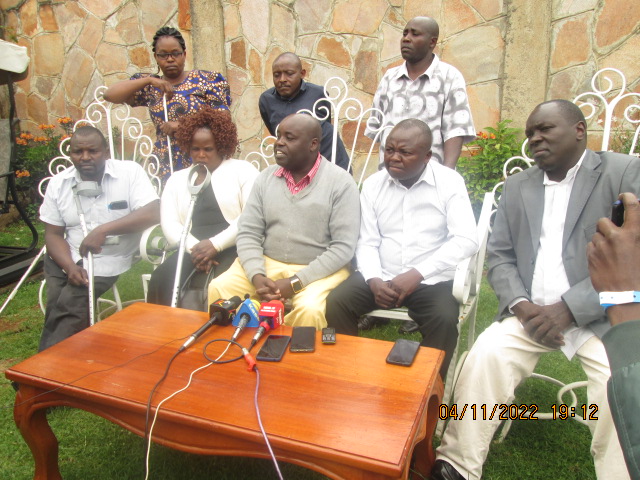 PWDs address the press at Comfort Restaurant in Kericho town on November 6
Image: BY SONU TANU

Say they believe that Governor Nathif Jama has good intentions going by his statements.
Counties
1 month ago

Say they are not represented in the Nyamira assembly.
Counties
2 months ago
Post a comment
WATCH: The latest videos from the Star
by SONU TANU
Rift Valley
07 November 2022 - 11:35
Read The E-Paper