Union officials praise CEO, say he should be in Ministry of Health.

• The union and MTRH signed a third CB that giving nurses better salaries and other financial and non-monetary benefits for four years. 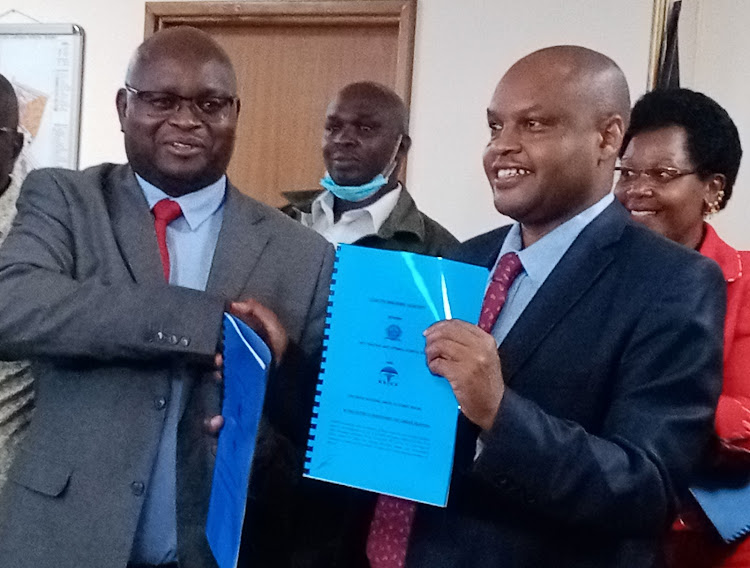 The Kenya National Union of Nurses has called the Moi Teaching and Referral Hospital in Eldoret as the best employer for nurses in Kenya.

“Unless it’s outside the country like in the US, there is nowhere in the country where a nurse can get the best working environment and even pay, if not at MTRH,” Panyako said.

He spoke at the hospital where the union and MTRH signed a third Collective Bargaining Agreement that will give nurses better salaries among other financial and non-monetary benefits for the next four years.

Panyako said MTRH was the best managed health facility in Kenya and the East African region and proposed Dr Aruasa who has developing it into a world-class service provider should be appointed as PS in the Ministry of Health.

“President Ruto has named his Cabinet and  he needs people who will help him implement the desire for Universal Health Care.He needs committed people like Dr Aruasa to serve in the ministry,” Panyako said.

He said under Dr Aruasa’s leadership there has been no industrial disputes involving nurses at the hospital and urged chairperson of  the Council of Governors Anne Waiguru to ensure counties emulate MTRH in dealing with workers' welfare.

“We are not interested in strikes over issues we can discuss through dialogue. Let others do what MTRH always does,” Panyako said.

“In any institution, success depends on the human resources and that's why we at MTRH will always value the contribution of or employees and strive to give them the best working environment,” Dr Aruasa said.

The CBA with KNUN was the third in a week after MTRH signed earlier agreements with a workers union and KMPDU for doctors.

More than 3,500 employees of the hospital are covered under four unions and the hospital will later in the week sign a final CBA to ensure it gives better terms to all its staff in the next four years.

“KUDHEIHA is the oldest union at MTRH and the CBA we have signed is the fourth and that is evidence of our good relations with the union just like others,”Dr Aruasa said.

He said the hospital was keen to ensure smooth flow of services because it serves patients from Kenya and other parts the region including Uganda, Rwanda and Tanzania among others.

Njeru said they had participated in negotiations for the last one year leading to the signing of the new CBA.

“We thank Dr Aruasa because he helped break the deadlocks we had during the negotiations and as he says we are equally keen to ensure the hospitals serves our people without disruptions caused by strikes by workers,” Njeru said.

He urged staff of the hospital to redouble their efforts in ensuring effective service delivery.

Dr Aruasa and KMPDU Secretary General Dr Davji Bhimji Atella led other officials from both sides in signing the CBA at MTRH.

Dr Aruasa said all the CBAs factored in guidance and advice from the Salaries and Remuneration Commission.

“In the negotiations with the unions we covered everything, including both financial and non-financial matters.

He said MTRH leads in ensuring a good and secure work environment for its staff." We rarely have disputes between staff and the management,"  he said.

Aruasa says they will sign other CBA agreements with two more unions.
Counties
2 months ago

Nairobi Hospital is number two, followed by Kenyatta National Hospital.
Counties
11 months ago
Post a comment
WATCH: The latest videos from the Star
by BY MATHEWS NDANYI
Rift Valley
28 September 2022 - 22:00
Read The E-Paper