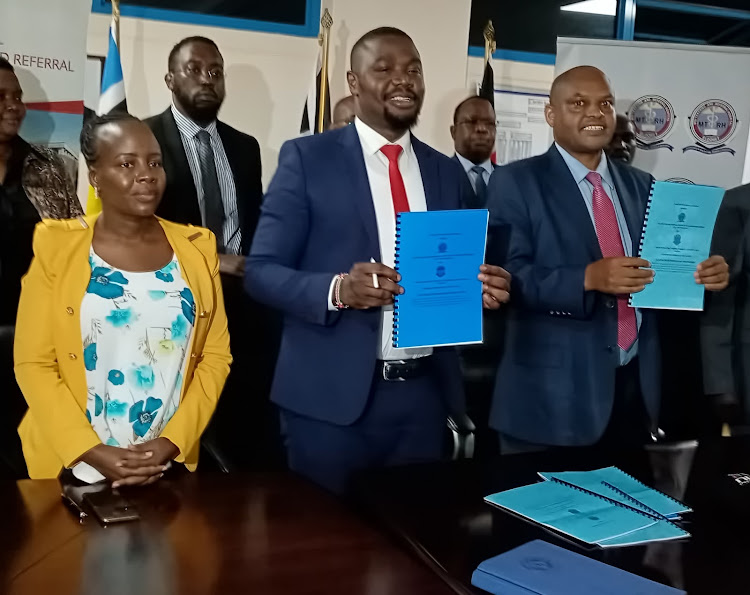 The Moi Teaching and Referral Hospital in Eldoret has signed a four-year CBA with the doctors union, providing higher salaries and other financial and non-financial benefits.

The CBA runs from July this year to June 2026. Dr Aruasa said it would enhance industrial harmony and labour relations between the hospital and the doctors at the institution.

Dr Aruasa said the CBA factored in guidance and advice from the Salaries and Remuneration Commission.

“In the negotiations we covered everything including both financial and non financial matters," he said.

He said MTRH leads in ensuring a good and secure work environment for its staff.

"We rarely have disputes between staff and the management," he said. "We always sit down and discuss all issues with the union. The bottom line is a consultative approach to management," Dr Aruasa said. He said MTRH regards union officials as part of the management and not external individuals.

The CBA covers issues such as how staff should be recruited, trained and promoted and handling disputes and other matters in an amicable manner. He said MTRH was an international organisation dealing with medical issues and research, hence, it benefits greatly from stability in labour relations with workers.

Dr Atella said industrial harmony enhances service to the public and he thanked the MTRH management for engaging in talks over renewal of the CBA without problems such as strikes witnessed in many institutions.

“We are happy the previous CBA before this one were fully implemented and we believe the one we signed will also be enforced without any issues like strikes. We have put in place a framework for handling all matters with the management," Dr Atella said.

He said the same approach by MTRH should be emulated by county governments and other institutions to improve management and services.

Dr Atella said unions had the capacity to negotiate with management  concerning welfare of workers to avoid disruptive strikes.

“The CBA has incremental value on the salaries of doctors throughout the four years. We have also agreed on issues like professional fees to be paid to the doctors, professional indemnity and the general improvement of the doctors' welfare, which ends up translating to the welfare of patients,"Dr Atella said.

Dr Aruasa thanked the media for being an ally to the hospital and the union in helping to improve health services in the region.

He said  research carried out by experts at the hospital was world class and largely contributes to policy formulation, especially as the country works to achieve universal health coverage.

Pregnancy that wasn't: Eldoret woman had cancerous tumour, not a baby