• Subsidising fertiliser and inputs will increase land under crop cultivation and reduce food shortage. Production has fallen as input costs too high. 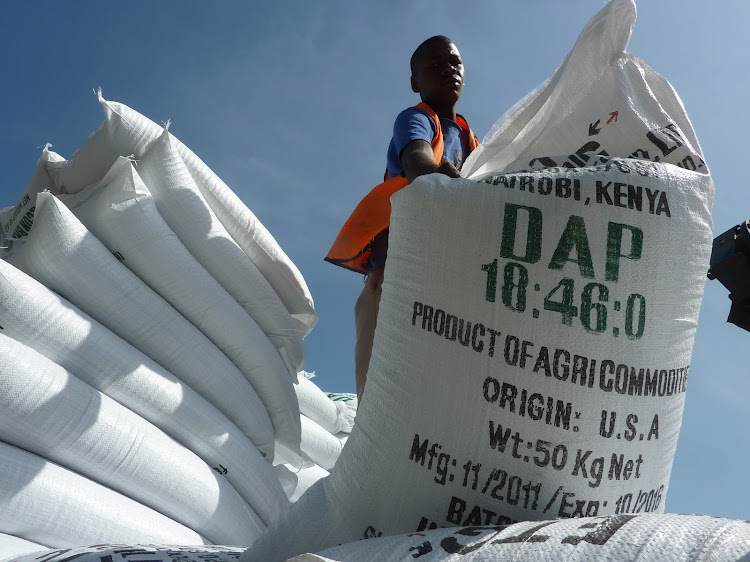 COSTLY FERTILISER: Worker offloads fertiliser. Uhuru government had subsidised prices by almost half after they soared to as muchas Sh6,000 per 50kg bag on the open market. Then it ran out.
Image: FILE

Farmers in Narok county have praised President William Ruto for reducing the price of fertiliser from Sh6,50 to Sh3,500.

They said the cost of production had risen so high that many farmers had been forced to abandon farming.

The farmer said he had reduced cultivated acreage from 50 to 20 acres because of the high prices of farm inputs.

“President Ruto was very right, if you empower farmers, you have empowered the whole population. Food prices will go down and farmers will have money in their pockets. The news was too good,” Marima.

Maize farmer Jackson Sadera from Nkaretta in Narok Central said many farmers had stopped large-scale farming and shifted to other ventures as fertiliser was too costly.

“This season I planted 20 acres and got 300 bags of maize. With the new directive, I will plant hundreds of acres,"he said.

In Narok, Maize is a major cash crop. It produces 3.5 million to 4 million 90kg bags of maize annually, according to the County Agriculture office.

Agriculture chief officer Dr David Letuati said only 88,780 hectares is planted with maize, compared with the past average of 110,000 hectares. So far, 1,556, 800 bags of maize have been harvested.

Most farmers in Narok grow maize in January and February because of the long rains from February to May.

Those on high lands like Trans Mara region also plant in September because of short rains between September and December.

Maize is the leading staple food in Kenya and when producto drops, the country is said to be facing 'food security threats'.

Already, Ruto has said he will announce new fertiliser prices next week.
News
2 weeks ago

Subsidies are unaffordable and distorting. The best way to reduce income inequality is to invest in free health and education for all Kenyans.
Opinion
2 weeks ago

• Unga is currently costing Sh230 • Assorted flour has run out of market
Business
1 month ago
Post a comment
WATCH: The latest videos from the Star
by KNA
Rift Valley
15 September 2022 - 22:00
Read The E-Paper