• Other GSU officers have also taken charge at Ruto's Eldoret town residence and his farm near Eldoret.

• AP officers who have been guarding the Sugoi home were not seen when journalists visited on Wednesday. 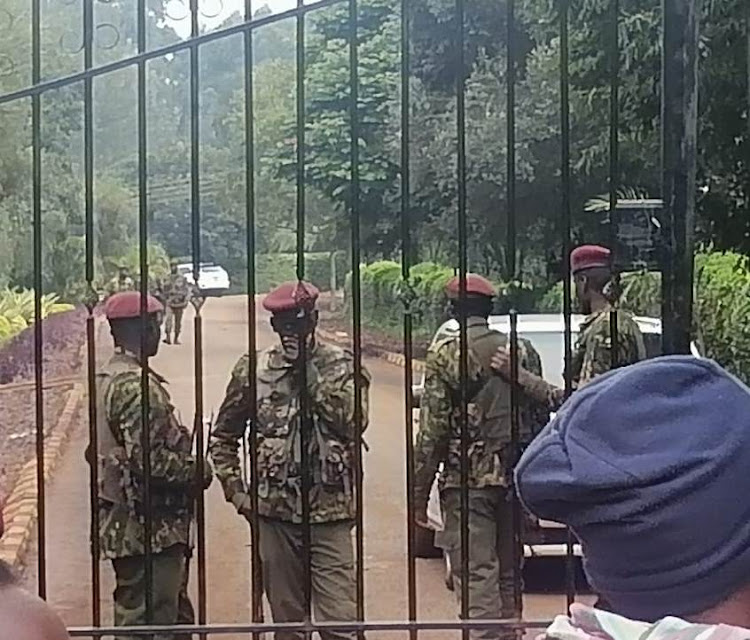 Security at President elect William Ruto's Sugoi home has been further enhanced with the arrival of more than 50 elite GSU officers.

Other General Service Unit officers have also taken charge at Ruto's Eldoret town residence and his farm near Eldoret.

AP officers who had been guarding the Sugoi home were not seen when journalists visited the home on Wednesday.

GSU officers at the main entrance bared the journalists from taking photos at the gate, in contrast to the more relaxed situation two days ago.

"You have to seek necessary clearance if you are journalists and want to take photographs or videos," one officer said.

The security has been gradually stepped up since Ruto was declared President-elect by the IEBC on Monday.

Other security teams were seen patrolling roads near the Sugoi home, about 30km from Eldoret off the highway to Webuye.

An expected Supreme Court petition challenging the election could bring tension, especially after the court's decision to confirm or invalidate Ruto's election. If Ruto's victory is not confirmed, then Azimio's Raila Odinga would triumph.

"We assure residents of our county that their security is well taken care of as they continue with usual activities," Gitonga said.

Residents have been celebrating since Ruto was declared President-elect.

UDA leaders in the region, however, cancelled a celebratory caravan that was to run from Kapenguria in West Pokot through Kitale, Iten town, Eldoret and then Kapsabet.

All elected leaders in the region led by UDA Senator-elect for Uasin Gishu Jackson Mandago and governors, among others, were to lead the caravan.

"We are happy for the President-elect and we will have activities to thank God," Mandago said.

Sources said the caravan was put off to await the outcome of the Supreme Court petition expected to be filed by the Azimo team.

Azimio flagbearer Raila Odinga has rejected results of the election and the decision by IEBC chairman Wafula Chebukati to declare Ruto as president-elect.

Mandago is among the leaders in the region who have sent congratulations to Ruto. Others are UDA governors Stephen Sang of Nandi, Wesley Rotich of Elgeyo Marakwet and Simon Kachapin of West Pokot.

UDA won almost all elective seats in the region, which is Ruto's political stronghold.

Coordinator of the party in the region Paul Kiprop said they were proud of residents for heeding the call to vote for UDA candidates.

"We have done resoundingly well and we will have strong leadership right from our assemblies to the national level," Kiprop said.

He said it would be easier for the party to implement its policies and development plans because of its dominance in assemblies and Parliament.

Ruto said his administration will work to affirm the bilateral ties between the two nations.
News
1 month ago

The state has enhanced Ruto's security and deployed elite G-company.
News
1 month ago