•Sunkuli, who was vying on the Kanu party ticket, is now the MP-elect for the Kilgoris constituency after defeating UDA’s John Ololtua.

•Sunkuli got 20,293 votes against Ololtua’s 16,713 votes. Shadrack Sabaya of the Jubilee party was in the third position after getting 12,957 votes. 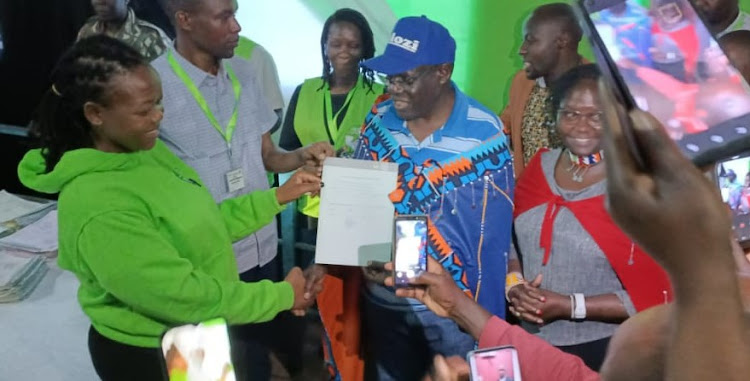 Former Internal Security minister Julius Sunkuli has made a grand return to parliament after being in the political cold for 20 years.

Sunkuli, who was vying on the Kanu party ticket, is now the MP-elect for the Kilgoris constituency after defeating UDA’s John Ololtua.

Shadrack Sabaya of the Jubilee party was in the third position after getting 12,957 votes.

Independent Candidate Joel Tasur garnered 1,889 votes and was in fourth place ahead of former NEMA chairman Dalton Konchellah of Ubuntu People’s Forum Party who had 1,882 votes to close the chapter of the best five contestants.

The former power minister in the former president Daniel Arap Moi’s regime will now take over from the immediate former MP Gideon Konchellah.

Konchellah vied for the Narok senate seat on the Jubilee ticket.

Sunkuli's chances were boosted a week before the general elections when Azimio La Umoja presidential candidate Raila Odinga picked the former Kenyan ambassador to China as the team's preferred candidate for the seat.

While speaking at the Suswa Declaration Rally for Maa community at the historic Suswa grounds in Narok county, Raila agreed with ODM flag bearer Oiboo Morintat to leave the stage and back the former MP.

Morintat voluntarily agreed to leave the seat and said he will join Azimio’s legal team which is headed by lawyer Paul Mwangi.

“I am a foot soldier for Raila and I wanted him to get many soldiers from the position of governors, senators, MPs, women representatives and MCAs and that is why I left the seat to Sunkuli to carry the Azimio flag in the next polls,” said Morintat.

The youthful lawyer added that Azimio La Umoja is bigger than individuals and if they go into polls with many candidates, they will be defeated by their opponents.

“For the respect of the Maasai community, Azimio La Umoja, I am not in the race anymore and I will play a role in ensuring that votes for Raila are intact and are safeguarded during the elections,” he said.

The former candidate thanked the people of the Kilgoris constituency for supporting him saying that he will serve them in another capacity.

Raila described Morintat as a patriot saying he will offer him a position in government if given a mandate in the polls.

Since losing to Konchellah in the 2002 general elections that ushered in the NARC government, Sunkuli has been trying hard to unseat the outgoing legislator but with no success.

In the 2013 general elections, he decided to contest for Narok senatorial seat on TNA but lost to former first Narok senator Stephen ole Ntutu. 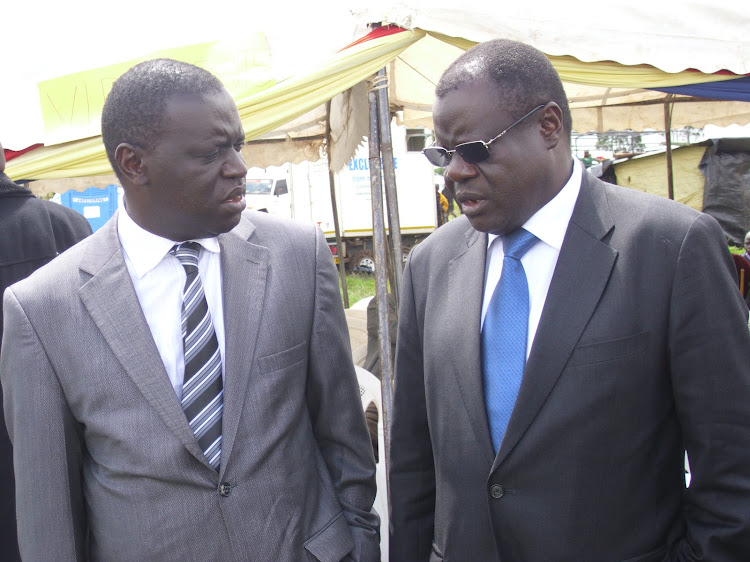 During that time, Sunkuli made the headlines after he contested the senate seat with his younger brother Andrew Sunkuli, who sought the seat on the independent ticket.

Despite the efforts of his late Father, Francis Sunkuli, family members, clans and friends to unite the two brothers and settle on one candidate, they went ahead and contested against each and both lost Ntutu.

“Under the Maasai culture, it is not prudent to send two brothers to the war and start fighting each other,” said their father in January 2013 when he tried to reconcile his two years.

In January 2014, Julius and Andrew buried the hatchet and vowed to work together and put aside their political differences during the burial of his father at their Poroko home.

Andrew said they are united as a family despite their divergent views on politics.

“However much we might have different political ideologies with my brother Julius, we are not enemies. We love each other,” he said.

Julius said that they have held consultative meetings with his younger brother to forge a formidable political unity.

“What happened in the 2013 elections was a political blunder and that will never happen again in our family,” said Julius.