• DP William Ruto was among the first  to vote at Kosachei Primary school near his home his Turbo constituency Uasin Gishu county.

• Uasin Gishu county returning officer Irene Mutai said they were satisfied with how the exercise was proceeding in most areas. 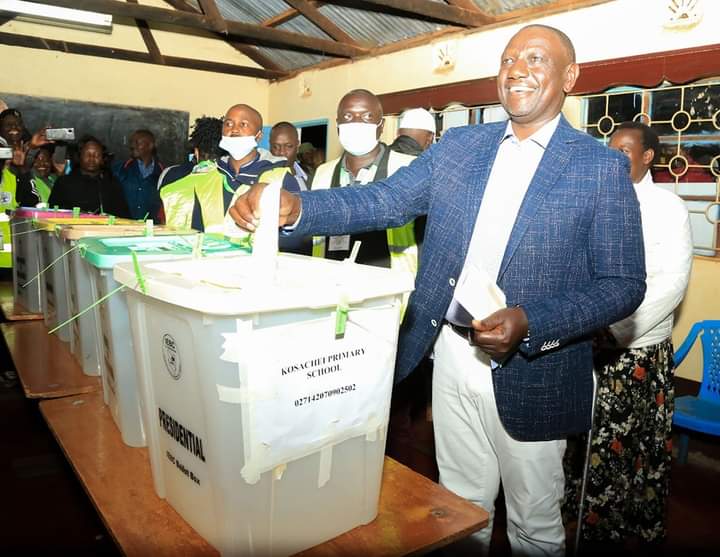 Polling went on smoothly on Tuesday in most parts of North Rift where the voter turnout was high and security was tight.

Deputy President William Ruto was among the first people to vote at Kosachei Primary School near his home his Turbo constituency, Uasin Gishu county.

“I feel very good that after so many months of campaigns selling our agenda, we have come to vote with my wife and neighbours," the UDA presidential flagbearer and leader of Kenya Kwanza said.

"Everybody wants a peaceful process. The exercise of choosing the next leaders is underway and I ask all voters to go out and vote."

The National Cohesion and Integration Commission has labeled Uasin Gishu and five other counties and clusters as possible election hotspots based on past experience.

Ruto, who was with his wife, Rachel, said the people of Kenya had the best opportunity to elect leaders who would take charge of the country for the next five years.

“It’s upon all of to respect the wishes of the people of Kenya," Ruto said.

In Uasin Gishu  the turnout was high especially within urban areas of Eldoret. The MV Patel polling station, which is one of the largest in the region, had long queues. About 30,000 voters were listed there.

Uasin Gishu county returning officer Irene Mutai said they were satisfied with how the exercise was going on in most areas.

“We had a good start in most areas and the polling stations opened up at exactly 6am,”Mutai said.

In a few polling stations the Kiems kits had hitches in identification of voters, causing some delays, but IEBC officials resolved the problems.

Uasin Gishu county police commander Ayub Gitonga said they had worked smoothly with the IEBC to ensure the process went on smoothly.

“We deployed security officers as guided by the IEBC and we did not have any major security challenges,”Gitonga said.

In Kerio Valley, hundreds of armed police officers patrolled most areas as voting went on smoothly. The area is prone to banditry attacks but Rift Valley regional commissioner said they had ensured that residents got chance to vote without fears of being attacked.

“We are happy with the security in place because many people were able to vote," voter Paul Tanui at Tot Primary school said.

The government temporarily lifted the 6pm to 6am curfew imposed in the region to enable residents participate in polling that started at 6am. Stations that opened late were expected to stay open later to accommodate voters.

In Nandi, Governor Stephen Sang voted early and expressed confidence the voting will go on smoothly.

“The polling exercise was smooth in most areas and we hope the entire process will end well as we strengthen our democracy," Sang said. He is seeking reelection through UDA.

All voted and expressed satisfaction with the exercise.

Senator Kipchumba Murkomen who is defending his seat through UDA, and his rival, outgoing Governor Alex Tolgos of Jubilee, also voted and expressed confidence in the process.

“We have had smooth campaigns and we just pray for peace as we go through the elections," Tolgos said.

Hundreds of observers from missions including the EU, US and Britain went round the polling stations in the region.

Security tightened in North Rift as polling info passed out

Calls for peace and harmony continue but Interior Ministry takes no chances.
Counties
5 months ago

Moment of truth for Ruto, Raila and Kenya

Defeat will destroy careers of many bigwigs, make those of well-funded greenhorns.
News
5 months ago