• Mandago says he had worked well with all his staff, including deputy governor Daniel Chemno.

• Says his staff had been very supportive and enabled him to achieve all that he did as governor. 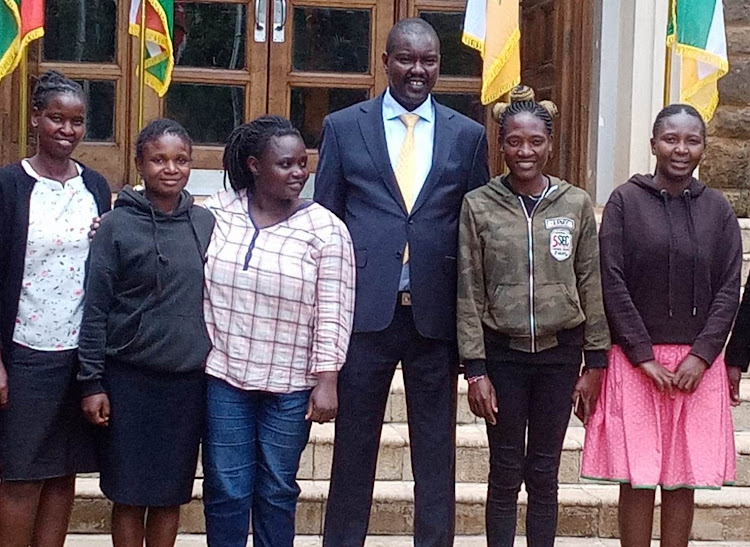 THANK YOU: Outgoing Uasin Gishu Governor Jackson Mandago with his junior staff at the county headquarters in Eldoret on August 8
Image: MATHEWS NDANYI

Outgoing  Uasin Gishu Governor Jackson Mandago bade farewell to his executives and staff on Monday, thanking them for helping achieve his agenda.

Mandago said he had worked well with all his staff, including Deputy Governor Daniel Chemno, whom he supports as his successor.

“I have no regrets but just happiness that I have achieved a lot with my team during the time I worked as governor,"Mandago said.

He said his staff had enabled him to achieve all that he did as governor and it will be easy for his successor to take over.

Mandago is now vying for the Senate seat in Uasin Gishu.

“I wish the staff remaining behind well and also success to the incoming governor," Mandago said.

He took memory photographs with his staff and friends.

“This photos are important because they will remind me of the time I served as the first governor of Uasin Gishu,” Mandago said outside the county offices in Eldoret.

Mandago says he made good use of Sh70 billion allocated to the  county.

Shortage of health personnel is a problem, he said.

He said if elected to the Senate, he will push for more than 35 per cent allocation to the counties so healthcare can be expanded and more staff hired in Uasin Gishu.

He also listed improvement in the water sector as one of his successes, saying access to water in Eldoret town had increased from 48 per cent to 75 per cent.

He said the county recruited many youths to technical training institutes to improve their skills.

Will use final rally to insist on peace and unity in county branded a hotspot.
Counties
1 month ago

• UDA party internal survey indicates intense rivalry in 10 areas but UDA campaigning for slate of its own candidates. • Ruto and Mudavadi are ...
Counties
2 months ago
Post a comment
WATCH: The latest videos from the Star
by BY MATHEWS NDANYI
Rift Valley
08 August 2022 - 22:00
Read The E-Paper