• Maalim said police are busy handling elections and no demonstrations will be allowed. 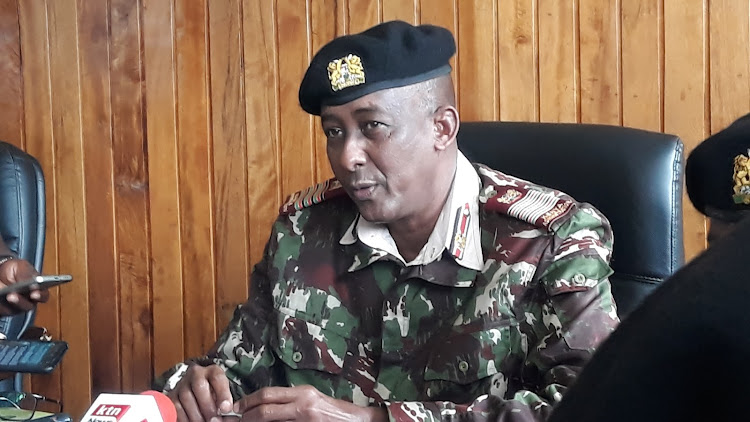 Rift Valley regional commissioner Maalim Mohamed has said no demonstrators will be allowed on roads during the week of the general election.

Kenya will go to the polls on Tuesday next week.

Maalim said that in the past, politicians used "peace demonstrations"  to disrupt the peace and destroy property in the vast Rift Valley region.

Paid thugs take advantage of such demonstrations to cause trouble, Maalim said, and warned residents to avoid joining such events.

"People should know there is a government in power that is responsible for the protection and security of the population. Let no one think this is a time to paralyse the law,” he said.

Maalim said that those found to be organising such 'peace' or other demonstrations will be arrested and dealt with according to the law.

The Public Order regulations require that organisers must notify the police in advance of plans to hold demonstrations of any kind.

However, Maalim said police are busy handling elections and no demonstrations will be allowed.

Nakuru county police commander Peter Mwanzo said election time is not a time to paralyse the law, adding that people should know the country is governed by the Constitution.

Nakuru has always been the epicenter of election violence since 1992 during the infamous ethnic clashes.

Molo constituency which consists of Kuresoi North, Kuresoi South, Molo and Njoro subcounties are always been at the center of election-related chaos.

Security has been enforced in potential hot spots, including some sections of Nakuru Town East, Nakuru Town West and Naivasha to ensure security before, during and after elections.

Other counties in Rift Valley where security has been strengthened are Uasin Gishu, Elgeyo Marakwet, Baringo and Samburu, among others.

“People are instructed to vote and leave the polling station because the IEBC, the security agents plus agents of every candidate will protect the votes,” he said.

Melle said there was no need for voters to think any problem would occur in the the polling stations because the IEBC and the other agencies were there to ensure the secrecy of the ballot and guard the integrity of the people's will.

On Thursday, Ruto claimed that he was aware of a plot to rig polls in Rift Valley.
News
6 months ago

Cold weather to continue in most parts of Kenya - MET