• Candidates said deployment of the agents was an important through costly measure for free and fair elections.

•Independent candidate for the Uasin Gishu governorBundotich Kiprop Buzeki said he would have agents in all polling stations to ensure the polls will be free and fair. 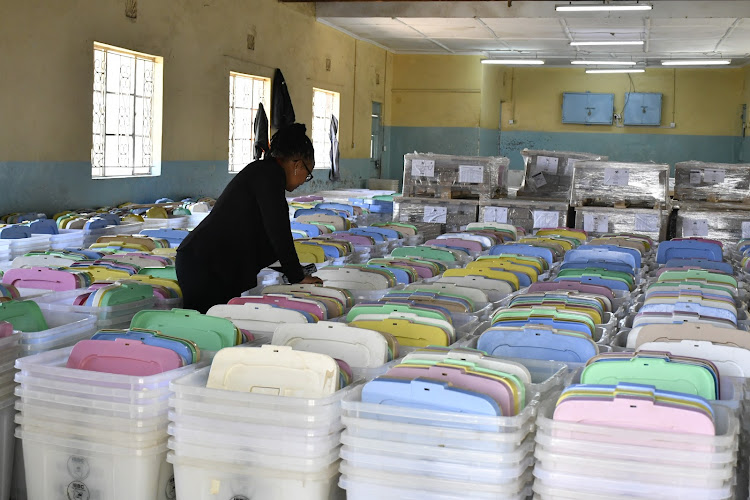 GETTING READY: IEBC official in Naivasha prepare election materials at Naivasha Boarding Primary School ahead of transportation to the 297 polling stations in the vast constituency.
Image: GEORGE MURAGE

Candidates and their parties finalised last-minute campaign strategy and retreated to deploy their agents to polling stations in readiness for the general election on Tuesday.

Most of the candidates said deployment of the agents was a costly but important measure for free and fair elections.

Independent candidate for the Uasin Gishu governor Bundotich Kiprop Buzeki said he would have agents in all polling stations in the region to ensure the polls will be free and fair.

“Agents will help to ensure that the entire exercise is done fairly and as per the law," Buzeki said.

Kesses MP Dr Swarup Mishra, who is also defending his seat as an independent, although he would deploy agents, he had total confidence in the IEBC to deliver a free and fair election.

“The IEBC is well organised and we believe they have put in place effective measures for a free and fair exercise,"Dr Mishra said.

He urged Kenyans to maintain peace throughout the polling exercise and afterwards.

UDA regional coordinator Paul Kiprop said they were ready for the elections and the party was working with all candidates to ensure agents are deployed at all polling stations.

“We have trained our agents to understand the elections process and be ready to serve effectively," Kiprop said

He said all the candidates and the party would work as a team in all areas.

IEBC officials in all counties in the region said they had received all election materials that would be moved to the polling stations on Monday.

Uasin Gishu county returning officer Irene Mutai said they had also completed training of election officials in all areas to ensure they will carry out their mandate correctly.

“We have prepared well and will work with all stakeholders to ensure everything is done smoothly and as per the law," Mutai said.  She said all systems were in place to ensure all election activities will be free and fair.

Clergymen in the region led by Catholic Bishop Dominic Kimengich said they were confident that the government and IEBC had put in place effective measures for smooth elections.

“We also urge the IEBC to do its work effectively to deliver a free and fair exercise to strengthen the country's democracy," he said.

Lists bearing names of voters at particular polling stations have been pinned on walls at all the polling centres, no more than 700 per centre.

In far-flung areas in Kerio Valley and other parts affected by insecurity, the IEBC will use choppers to distribute election material.

Expect the Mother(s) of all rallies on Saturday.
News
1 month ago

The nation has two days to reflect, set aside the mudslinging and slurs and vote wisely on Tuesday.
News
1 month ago