Elders call for arrest of hate leaflets distributors in Eldoret

Interior PS Karanja Kibicho has deployed a team of DCI officers to track down those involved.

• The leaflets were found thrown in several areas including Kesses and Cheptiret among other villages in the county.

• Uasin Gishu is one of the counties listed among hot spot regions with the possibility of experiencing violence during next week's polls. 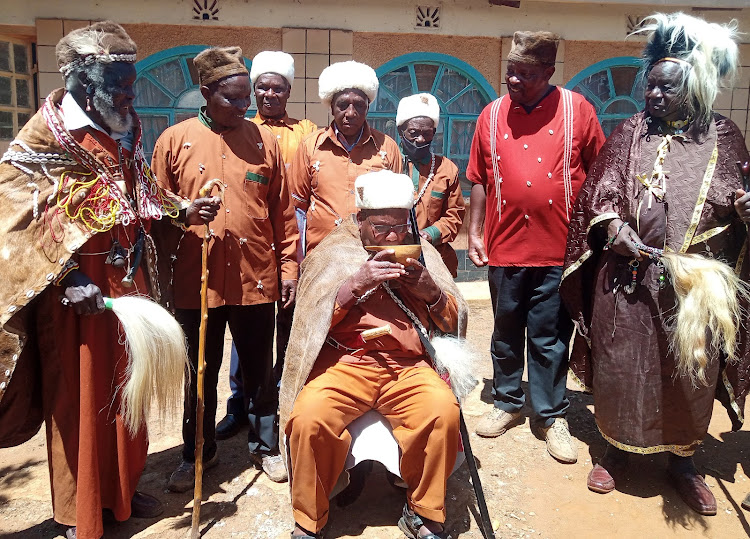 ELDERS: George Kinyanjui sips porridge after being installed as chairman of the Kikuyu elders in Uasin Gishu in Eldoret on November 14, 2021.
Image: MATHEWS NDANYI

Circulation of hate leaflets in parts of Uasin Gishu county has sparked anger among elders from the region who are demanding arrest of those involved.

The inter-community elders led by John Yego said police must move with speed and deal with hate mongers with just few days to the polls.

Interior PS Karanja Kibicho has deployed a team of DCI officers to track down those involved in circulation of the hate leaflets in parts of the county.

The leaflets were found thrown in several areas including Kesses and Cheptiret among other villages.

Uasin Gishu is one of the counties listed among hot spot regions with the possibility of experiencing violence during next week's polls.

"We are a peaceful county and we will not allow anyone to disrupt we have between communities in this county," Yego said.

He said they had been meeting as communities in Uasin Gishu and would still work to ensure that the elections will be peaceful in the region.

Addressing a rally at Huruma grounds on Sunday Azimio leader Raila Odinga accused DP William Ruto's team of propagating threats against residents of the region to force them to vote in a particular way.

"Kenya is a democratic country and no one will be evicted from anywhere for voting in a particular way," Odinga said.

But speaking during the elders meeting representative of the Kikuyu community Joseph Nyanjui urged communities to ignore the hate leaflets.

"Elections should not be a reason to cause divisions among our communities and we urge all residents to keep peace and unity," Nyanjui said.

He said police should act tough to ensure anyone interfering with peace and unity is dealt with firmly.

Leaders from the region have also condemned the circulation of the leaflets and urged residents to stay calm and vote freely.

Governor candidate for UDA in Uasin Gishu Jonathan Bii said residents should be free to vote without any fear.

"We urge our people to turn out and in large numbers and vote for UDA while maintaining peace and unity," Bii said.

Last week a campaign vehicle belonging to independent candidate for governor Bundotich Kiprop Buzeki was stoned in the town causing protests from his supporters.

Buzeki has urged police to act tough and ensure that residents will freely participate in next week's polls.

"We should not retrogress by engaging in primitive acts of electoral violence. People should vote based on the manifestos from the leaders and not force," Buzeki said.

Uasin Gishu county commissioner Stephen Kihara says security teams in the region are ready to ensure that the polls will be free of any acts of violence.

"We are prepared to ensure our region will be peaceful during the polls," Kihara said.

Oguna appeals to politicians to preach peace ahead of polls

Any leader worth his salt must pause; self reflect and remember that their ambitions for office must not cost a single life
Opinion
2 weeks ago

Candidates and residents warned police would firmly deal with perpetrators of violence
Counties
2 weeks ago
“WATCH: The latest videos from the Star”
by BY MATHEWS NDANYI
Rift Valley
01 August 2022 - 22:00