CS Matiang'i addressed the endorsement ceremony through a phone call.

•Natembeya is running against Ford Kenya Secretary General  Chris Wamalwa and five others.

•The race is, however, billed as a two-horse race between Natembeya and Wamalwa, according to opinion polls 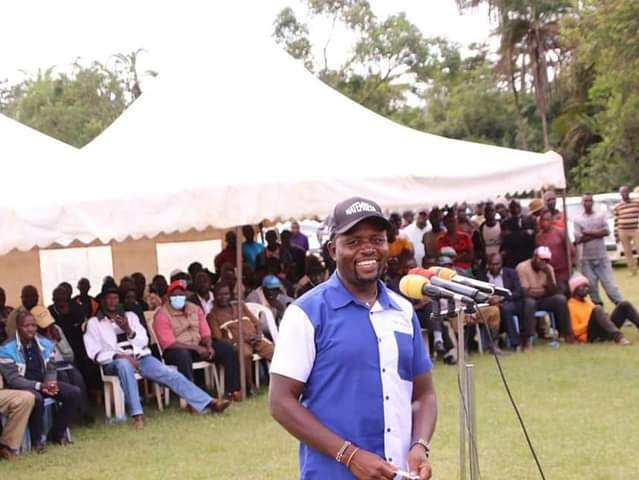 Democratic Action party of Kenya Trans Nzoia gubernatorial contender George Natembeya has won the endorsement of a section of the Kisii community, two weeks to the August 9, elections.

Natembeya is running against Ford Kenya Secretary General  Chris Wamalwa and five others.

The race is, however, billed as a two-horse race between Natembeya and Wamalwa, according to opinion polls.

Natembeya’s endorsement by the Kisii Community carries weight in a County where the community is described as the eldest house of  Masaba.

They make up about 30 per cent of the cosmopolitan county.

The Kisii Elders Council Chairman Jeremiah Moturi said communities living in Trans Nzoia needed a leader who was above the tribe.

Speaking during an endorsement meeting held at the Kitale Nature Conservancy in Kwanza Sub County on Wednesday, Moturi said Kenya and Trans Nzoia by extension needed a pragmatic leader to spur development.

The more than 500 elders, youths, Women and Professional leaders from the Omugisii community were thrilled when Interior Cabinet Secretary addressed them via a telephone conversation asking them to rally behind Natembeya.

The Cabinet Secretary lauded Natembeya's momentum saying he is best suited to lead the county.

“The house of Omugusii has come a long, long way. I challenge you to rally behind Natembeya who I'm sure will help put all communities together," said the CS.

President Uhuru Kenyatta on Tuesday endorsed the former administrator during a telephone conversation.

“No one is more committed to the fundamental principles of making Trans Nzoia great than Natembeya’’.

The President challenged the Kikuyu Community and others residing in Trans Nzoia to vote for development and not stagnation.

Defence Cabinet Secretary Eugene Wamalwa who was present during the endorsement ceremony said Trans Nzoia County was dotted like a leopard’s skin and that it was hard to have the different dots washed away by any powerful detergent.

"Trans is a Cosmopolitan County with all communities that have been knit together and shouldn’t be separated from each other."

No single community in the County, the CS said, should be threatened by anyone for having a divergent political opinion.

“You are all here not on anyone’s invitation. No one should be threatened because you don’t agree with his or her political opinion. Those political tourists that are doing night meetings to divide our people should stop".

He rallied the communities to vote for Odinga whom he said was out to unify all Kenyans irrespective of political affiliations.

He told the DP that the real debate will be on August 9, when he will face Raila on the ballot saying he should prepare to concede defeat.

“I can tell you exactly how it will be, the deputy President should retire and go home to enjoy his pension," he said.

Khaemba said his administration had pumped in Sh59 million into the project.
Counties
4 months ago
Post a comment
WATCH: The latest videos from the Star
by DAVID MUSUNDI
Rift Valley
29 July 2022 - 01:06
Read The E-Paper