• Plans underway for rallies in Eldoret and Kapsabet towns, plus roadsde meetings on same day.

•This comes after Raila made forays into West Pokot, Baringo and Elgeyo Marakwet counties, perceived strong holds of Ruto. 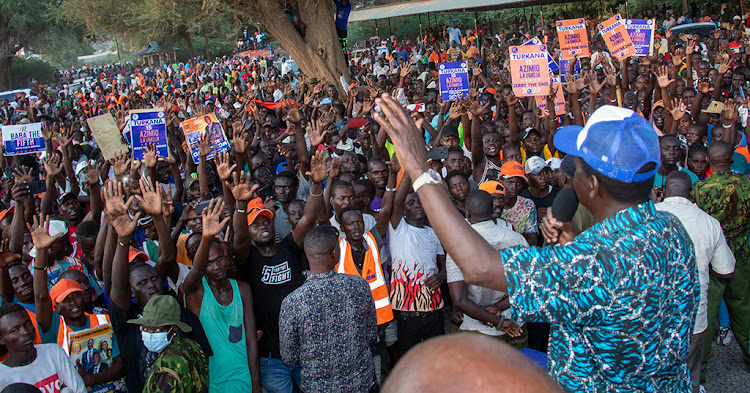 Plans are underway for the rallies to be held in Eldoret and Kapsabet towns, plus other roadside meetings on the same day.

This comes after Raila made forays into West Pokot, Baringo and Elgeyo Marakwet counties, which are also perceived as Ruto's strongholds.

Governor Alex Tolgos of Elgeyo Marakwet, who is coordinating Raila's campaigns in the region, said they were confident the Azimio presidential candidate will get more than 30 per cent of all votes in North Rift.

"We have done massive campaigns and we are sure Odinga will get many votes," Tolgos said.

He is working with former Minister Sally Kosgey and ODM official Kipkorir Menjo, plus elders and professionals to campaign for Azimio.

Azimio has several key candidates in the region including Tolgos who is vying for Senate in Elgeyo Marakwet, Gideon who is defending his seat in Baringo and Samwel Mugo popularly known as Samkiz who is vying for the Turbo parliamentary seat.

Early last month Karua made a campaign tour in Eldoret where she was welcomed warmly and attended a major rally at Huruma grounds.

She abandoned her vehicles and campaigned on foot through the streets of Eldoret before attending the rally at Huruma.

Raila has traditionally enjoyed some significant support in Eldoret, which is a largely cosmopolitan area, and also in pockets of backing from farmers in the region.

More than 700 professionals from the region led by Dr John Kibosia have also been campaigning for Odinga.

"We have told our people that Odinga will be the fifth president of Kenya and we have to also vote for him," Dr Kibosia said.

Musalia Mudavadi's ANC party branch officials led by chairman in Uasin Gishu Saina Nechu also defected to Raila's side and has been campaigning for Azimio.

The Azimio leaders have also asked supporters and residents to maintain peace and unity during the election period.

"At the end of the day what we want is total peace so that everyone can resume their lives after the August 9th polls," Tolgos said.

He said he will provide subsidies and drop the fertilizer prices from the current Sh7000 to Sh2000.
Counties
4 months ago

Ruto tipped for first round win at 50.5%, poll shows

Poll by Intel Research Solutions shows Raila likely to get 44.2 per cent of the vote
News
4 months ago