•Dr Mishra caused surprise as he distributed more than 100 dairy cows to poor families as part of his initiatives to fight poverty.

• The MP also enrolled 1,000 senior citizens to the NHIF to enable them access healthcare easily. He paid for a one-year-package each. 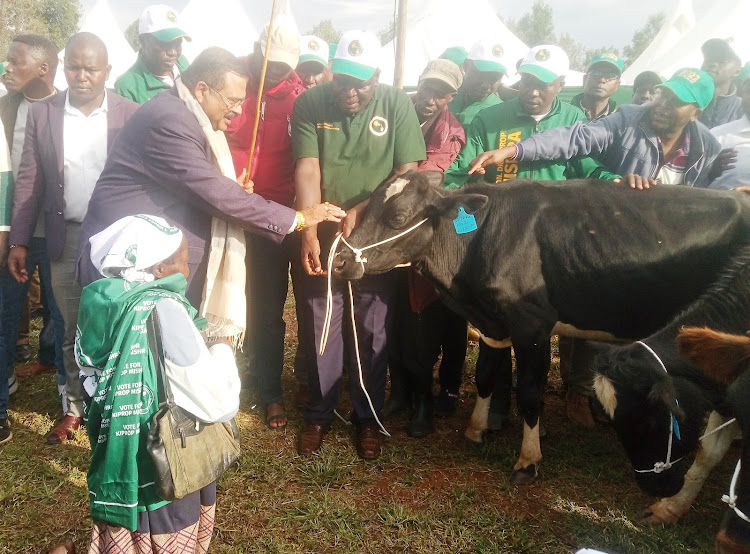 Kesses MP Swarrup Mishra unveiled his score card and five-year manifesto, expressing confidence he would be reelected despite running as an independent.

He is running in a UDA zone.

Dr Mishra also caused a surprise on Saturday as he distributed more than 100 dairy cows to poor families in his constituency as part of his initiative to fight poverty.

The MP also enrolled 1,000 senior citizens in the NHIF to enable them access healthcare easily. He paid for a one-year package each.

During the unveiling of his manifesto at his office in the constituency, the MP also gave out bursary cheques and money for expansion of schools totaling more than Sh110 million.

“We have done quite a lot as detailed in my scorecard for the last five years but together we will do more in the next five years if you re-elect me," Dr Mishra said.

The MP, popularly known by his Kalenjin nickname Chelule, has so far given out more than 1,000 dairy cows to families in the area since he was elected.

But asked to confirm how many animals he had given out or how much he had spent on the community empowerment programme Dr Mishra said, “In Kalenjinm we don’t count cows but we just value the milk."

The MP said the decision to defend his seat on an independent ticket was made by residents because he does not belong to any party or individual.

“My party is the Kesses people and leadership is not about the next election but the next generation,” Dr Mishra said.

He said his leadership was focused on impacting positively on the lives on residents and helping them to secure future generations.

“That is why we have initiated many empowerment programmes for youth and a woman among other groups so in the future all our people will be self reliant,” Dr Mishr said.

Dr Mishra is among popular MPs expected to be re-elected in the region that is the backyard of DP William Ruto and a stronghold of his UDA party.

Dr Mishra, along with his Moiben counterpart Silas Tiren and William Chepkut of Ainabkloi, are defending their seats as independents.

Ruto’s allies in the region have in the last one week urged residents to reject independent candidates and vote six-piece in favour of the UDA candidates.

“For all those who have been saying all manner of things about me, I have forgiven them because they are all our sons and daughters in Kalenjin land,"Dr Mishra said.

Kenya Kwanza supporters said to have roughed up backers of MP Chepkut.
Counties
4 months ago

Keter, Tiren and Kutuny are battling against UDA candidates in their constituencies
Counties
4 months ago