• The  chamber condemns violence and calla upon all political aspirants, their supporters and all leaders to maintain peace. 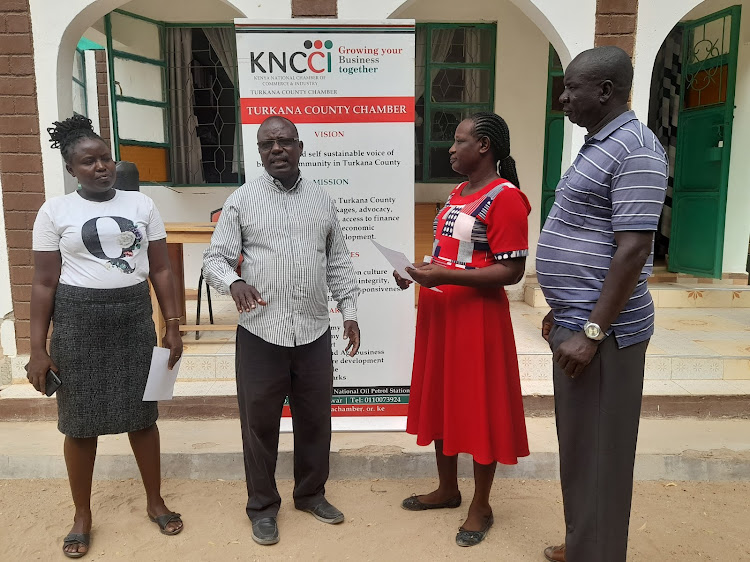 “During this electioneering period, the Turkana Chamber is advocating for peaceful campaigns to foster a stable business environment during and after the elections to ensure business continuity,” Edome said.

He said  violence is usually witnessed during the electioneering period when the supporters of politicians engage in fights due to differences in opinions.

Edome condemned the recent violencei n Lodwar during the rally of Azimio led by Presidential candidate Raila Odinga where the ODM and Jubilee supporters clashed.

“It has been with great dismay  the Turkana County Chamber and the business community at large, have witnessed the increasing incidences of political intolerance that have taken place in Turkana County,” he said.

He said they are concerned that these could escalate to businesses disruption and possible threats to life, property and impact negatively on investments.

“Such political violence could be a major setback that will harm the businesses that are yet to recover fully from the devastating effects of the COVID- 19 pandemic and are still struggling,” he said.

He said the Chamber condemns these incidents and call upon all political aspirants, their supporters and all leaders to maintain peace and conduct campaigns in a peaceful manner.

Elizabeth Lokolio Women representative for KNCCI-Turkana branch called upon all political parties and their supporters to asopt peaceful co-existence during campaigns.

“We urge politicians and their supporters to maintain peace during this election period because elections comes and go,"

"As we approach the climax of this electioneering period, let us be our brothers' keepers and avoid the kind of politics that may divide our people and affect our hard-earned future,” she said.