• The region is a perceived Deputy President William Ruto's stronghold.

• They welcomed Raila and Karua for campaign meetings in the region, where they will formally endorse him. 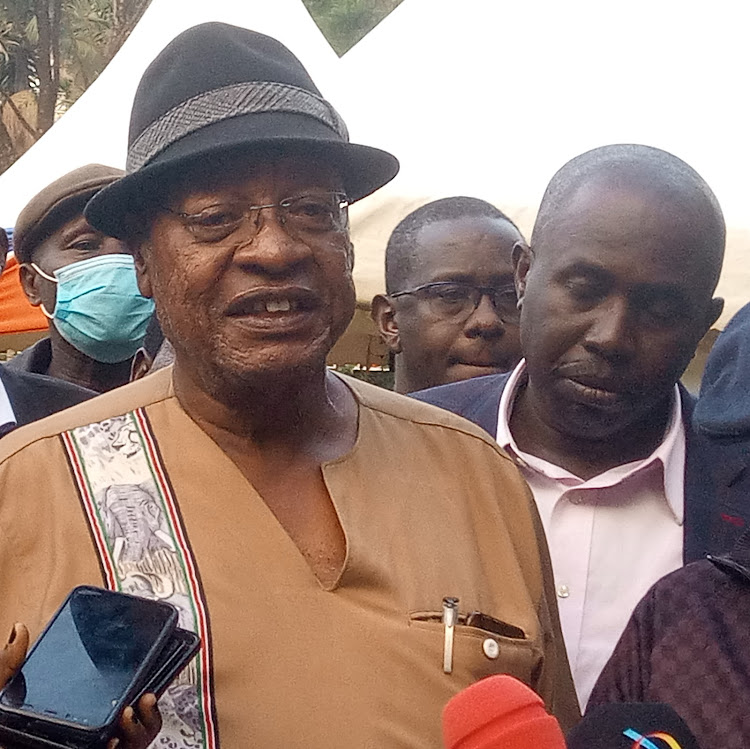 KIBOSIA Patron of the professionals from Elgeyo Marakwet Dr John Kibosia after a meeting in Eldoret on July 1, 2022
Image: BY MATHEWS NDANYI

More than 700 professionals from Elgeyo Marakwet county have endorsed Azimio leader Raila Odinga for the presidency.

The region is a perceived Deputy President William Ruto's stronghold.

The professionals described Raila and his running mate Martha Karua as the safe pair of hands to lead the country.

The professionals from the Keiyo and Marakwet communities met in Eldoret where they made the declaration to back Raila.

They said he will help resolve challenges in the region, especially banditry in the Kerio Valley.

They also backed outgoing Elgeyo Marakwet Governor Alex Tolgos, who is vying for the senate seat in the county against incumbent Senator Kipchumba Murkomen. Tolgos is vying on the Jubilee ticket.

The professionals and key political leaders from the region were led by their patron Dr John Kibosia, a former CEO at Moi Teaching and Referral Hospital.

“Raila has demonstrated his commitment and love for this country and his choice of Martha Karua as a running mate makes the two a safe pair of hands for the leadership of this county,” Kibosia said.

They welcomed Raila and Karua for campaign meetings in the region, where they will formally endorse him.

“We have already hit the ground campaigning for Azimio and we are confident that Raila will carry the day come August 9,” Kibosia said.

However, the move by the professionals is likely to shake up politics in a county that has been rated as having achieved the quickest growth in the last 10 years.

The leaders praised Tolgos, saying he is bold, fearless and a visionary leader.

Kamar said she is not vying for any seat, but will campaign for Raila and Tolgos.

“We want to be part of the next government and it is now evident that the fifth President of Kenya will be Raila,” she said.

Kaino said Raila and Karua have for many years fought for the welfare of Kenyans and time had come for them to take leadership and eliminate the curse of corruption which has bedevilled the country for many years.

The former MP claimed that some of those opposing Raila were involved in the Arror and Kimwarer dam scandals.

He said residents lost massive economic benefits following the cancellation of the dams.

“Raila and Karua have the capacity to fight corruption in this country,” Kaino said.

Kilimo said they will campaign to ensure Raila gets many votes in the Rift Valley region.

“Our region has suffered immensely with many challenges in terms of infrastructure and other development challenges, but we have hope that Raila and Karua are the key to the solutions we have been yearning for,” she said.

Ruto hounded me out but I found comfort in Azimio — Tolgos

More than 30 grassroots UDA activists also defected to the Azimio.
News
1 month ago
“WATCH: The latest videos from the Star”
by BY MATHEWS NDANYI
Rift Valley
03 July 2022 - 22:00