Nderitu was speaking in Nakuru during a Civic Education training workshop. 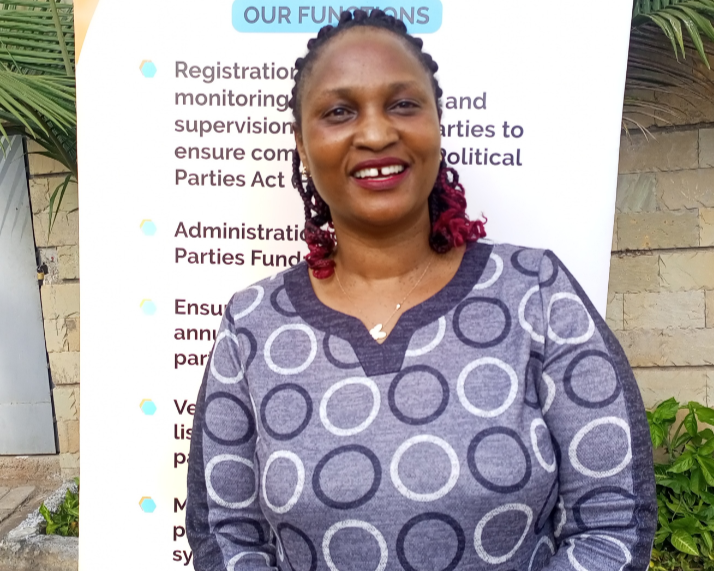 Office of Registrar of Political Parties (ORPP) has said women need to be guaranteed peace to enhance their participation in political elections.

ORPP boss Ann Nderitu said women should be assured of security during the campaign, before and after elections for them to participate either as voters, aspirants or candidates.

She said the ORPP was targeting women in its peace campaigns to ensure they have the right information on what to do in case they feel unsafe or intimidated.

“ORPP has had meetings and workshops bringing women, youth and People Living with Disabilities (PWDs) together and creating structures supporting their participation in electoral processes."

Nderitu was speaking in Nakuru during a Civic Education training workshop for churches and Non-Governmental Organisations.

She said ORPP was sharing information because sometimes information gaps led to people not knowing what to do or not when preparing for elections.

The registrar noted that ORPP had engaged civil societies and churches urging them to support the candidature of all interested people.

Most importantly, they called for the protection of the rights of Special Interest Groups (SIGs)such as women, youth and PWDs because they are sometimes marginalised.

“In the past one month, ORPP has trained political parties, specifically women leagues and the youth leagues urging them to support the SIGs and prevent electoral violence against them,” she said.

Nderitu said the open discussion and information shared had garnered massive support from political parties with some going out of their way to support women candidates.

She observed that Kenya should be inclusive in leadership matters by giving equal and equitable opportunities to all.

Nderitu also challenged the media to give fair coverage to all candidates regardless of their gender or physical appearance.

The Registrar noted that political parties were the key participants in elections because they field candidates and hence, they have a duty to preach peace.

“Political parties must also take care of their supporters and ensure that the good conduct is implemented,” she said

She added that every candidate has a responsibility to ensure peace through their utterances and actions.

ORPP is conducting 13 forums in 39 counties for nine days as they spread the message of peace to all parts of the country.

They are also urging citizens and duty bearers to be always alert to ensure no political activities cause a breach of peace.

She observed that some of them could not meet the legal requirement and were therefore not registered as candidates by the IEBC.

ORPP is however of the opinion that elections are better organised within political parties.

“Going forward, it is important to continue strengthening political parties so that everyone feels comfortable to run for positions."

Don't complain if you're left out and aren't a member, woman, youth, PWD told.
Counties
5 days ago

AJUOK: How IEBC could become enabler of criminal networks in Parliament