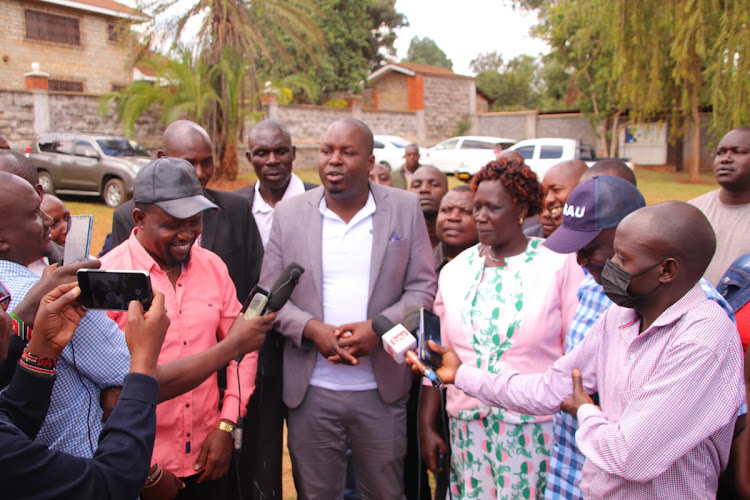 Naibei said he decided to quit the race in support of Natembeya after the former Rift Valley regional commissioner picked his aunt Philomena Binea Kapkory as running mate.

“In support of my aunt Kapkory who is Natembeya’s running mate, I hereby resign as running mate to Jimmy Nduruchi. I have already written to IEBC informing them of my decision," Naibei said.

The move is a big blow to Nduruchi's candidature although he has dismissed Naibei's decision, saying it was fuelled by tokenism.

Naibei is from the Sabaot community, a key swing vote block for governorship candidates. He asked Nduruchi to remove his portrait from campaign posters.

Naibei, who defected with more than 750 grassroots campaigners, said he will lead the team in traversing the county in search of votes for Natembeya.

Challenged to explain the legal implications of quitting the race after being cleared by the IEBC, Naibei simply said he had resigned.

Speaking  at his Ukombozi Centre after receiving the defectors, Natembeya said the journey of liberation had started in earnest and challenged his competitor, Chris Wamalwa, to read the signs on the wall and join the winning team.

" Team Ukombozi wish to thank brother Naibei and his team for joining the winning side. We are ready to receive other candidates," Natembeya said.

The former administrator exuded confidence that his team would form an inclusive government where all communities will be accommodated.

"This is a winning side that is ready to give better and quality services to the people of Trans Nzoia," he said.

Speculation has however been rife that Naibei fell out with Nduruchi following unfulfilled promises.

Nduruchi downplayed the defection of his running mate to the Azimio la Umoja coalition, saying the move was inconsequential and posed no threat to his candidature.

Naibei dumped the independent candidate alongside his supporters, citing lack of clear-cut vision and display of undemocratic tendencies by the candidate.

However, while addressing journalists at his campaign centre, Nduruchi described Naibei’s exit from the race  as a blessing with no negative electoral implication on his  governorship ambition.

He accused his estranged running mate of being stumbling block to his  quest to rescue Trans Nzoia people from the shackles of poverty, insecurity and underdevelopment.

“I have invested so much time and huge resources into my running mate and the campaign in general and, as such, it is unacceptable to be lured with little coins which I could have given him," Nduruchi said.

The defection has now raised critical questions in the 2010 Constitution, with legal minds hoping that the 13th Parliament will be able to pass a law that will bar candidates from defecting within a certain timeline.

Political analyst Dennis Wambalaba said there was no constitutionally set timeline for a gubernatorial candidate to name another running mate when fate strikes like it did in Nduruchi’s case.

"Nduruchi and any other candidate who may find himself in such a situation can still enter into an agreement with the Independent Electoral and Boundaries Commission to pick another running mate or go it alone," Wambalaba said.

Naibei says he quit after the former administrator picked his aunt as his deputy.
Counties
7 months ago

He asked his competitors to shun violence, intimidation and insults during the campaigns.
News
7 months ago

Professionals led by Lucy Nyambura rally behind Natembeya, saying everybody felt safe under his administration
Counties
7 months ago