•Pasha told reporters he will not be cowed in finding a lasting solution to the problem of Maasai community members living in Ngorongoro and Loliondo.

•Tanzanian authorities have started evicting them to pave the way for a trophy hunter investor from the United Arab Emirates. 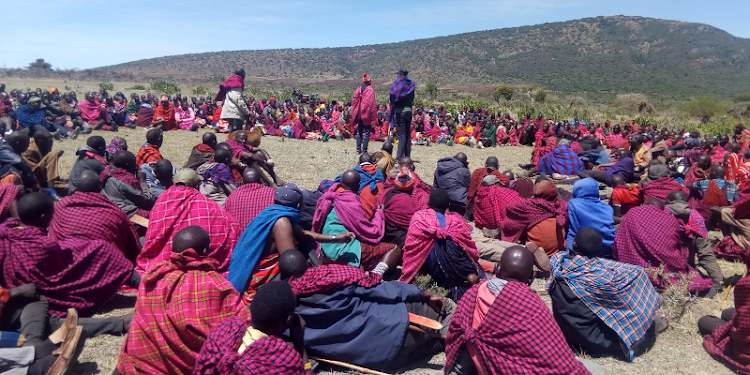 Maa Unity Agenda leader Jonathan Pasha has said he will cross over to Tanzania to stand with community members being prosecuted for murder in Arusha over the Ngorongoro and Loliondo killings.

Pasha was on Friday last week arrested in Nairobi and released hours later alongside two officials of the outfit.

He was protesting outside the Tanzanian High Commission to protest the injury of 31 indigenous Maasai in Ngorongoro by armed forces.

Pasha told reporters he will not be cowed in finding a lasting solution to the problem of Maasai community members living in Ngorongoro and Loliondo.

Tanzanian authorities have started evicting them to pave the way for a trophy hunter investor from the United Arab Emirates.

“Nothing will stop us from standing with our Tanzanian brothers and sisters on this. I am planning to go to Arusha to stand with them in a murder case,” Pasha said.

He said he is aware of the stringent rules issued by the Tanzanian government on foreigners attempting to cross over to Loliondo and Ngorongoro but that will not stop him from going to Arusha next week.

“That is just hot air. If they arrest me, the world will make noise for my freedom. We stand for justice to our members, and nothing will stand in my way,” Pasha said.

The Tanzanian government is in the process of allocating the land to a foreign investor to use for trophy hunting purposes.

The government has been accused of using violence against Maasai herders protesting efforts to evict them from one of the country’s most popular tourist destinations.

Witnesses in the Ngorongoro area said some of the wounded people fled to Kenya to seek medical care, fearing retaliation from Tanzanian authorities.

Ngorongoro MP Lekishon Shangai told said 20 people arrested last week, including political leaders, were charged with murder on Thursday at the Resident Magistrate's Court in Arusha without advocates being notified.

All the 20 people were accused and charged with the murder of one policeman said to have been shot by an arrow after he was seen beating up a 70-year-old man during the start of the eviction last week.

A caller, who sought anonymity on Saturday said there is an elaborate plan by the authorities in Tanzania to mislead the world that all is well in Ngorongoro.

“A young man [ name hidden] has been asked to look for 20 young men and 20 women dressed in the Maasai attire, who will be taken to Ngorongoro on Monday to pose as the local people,” the source said.

“They will speak before the state cameras telling the world they have no issues with the government.”

The source said the man told him that they will be telling the world that nobody lives in the conservation area and that they are many miles away from the residential areas.

The confrontations, which erupted after Maasai community members noticed Tanzanian authorities marking off land reportedly for a game reserve, occurred just days before the East African Court of Justice is set to rule next week on the merits of a case filed by supporters of the Maasai against Tanzania’s government.

The government was served notice of the upcoming judgment, and lawyer Donald Deya wondered whether Tanzanian authorities were trying to pre-empt it by marking off the land.

The Maasai community in Tanzania is calling on their government to stop the mass evictions and human rights violations directed at their members in Loliondo and Ngorongoro conservation areas.

The evictions are carried out to make space for safari tourism and wildlife hunting.

The Maasais are asking the regional and global community to join them in solidarity.

The Tanzanian government, with the support of the United Nations Educational, Scientific and Cultural Organisation and the International Union for Conservation of Nature, is preparing to evict 167,000 Maasai (97,000 living in the Ngorongoro and 70,000 in Loliondo) from their ancestral lands.

In Loliondo, the Tanzanian government has leased the 1500sq km of Maasai land to the Otterlo Business Company, a Dubai royal trophy hunting firm.

The deal was signed in 1993 and is renewable every after 5 years.

In a video posted by the Survival International group, fired shots can be heard as the natives flee.
News
2 weeks ago

This is the second document that the police Service has flagged as fake on Tuesday.
News
1 week ago

One person is unaccounted for after the police invasion.
News
1 week ago