• Businessman Buzeki, who runs Buzeki Dairy, is vying as an independent candidate for governor.

• He will face UDA's Jonathan Bii, popularly known as Koti Moja, and former CEO of ADC William Kirwa who will run on the Azimio ticket. 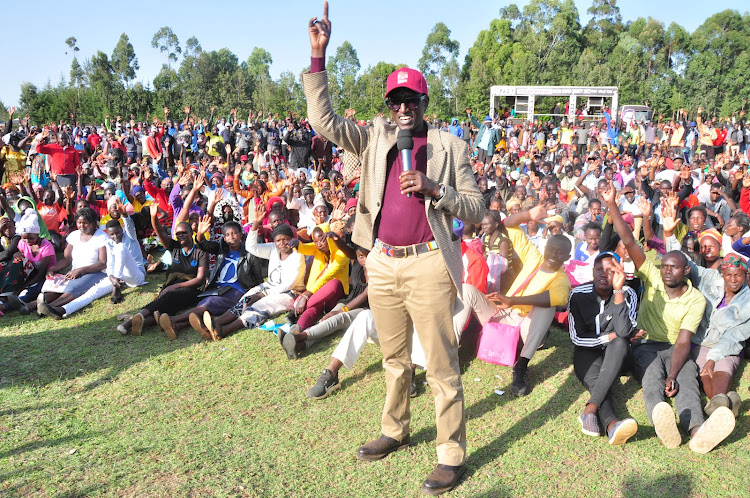 Bundotich Kiprop Buzeki  has promised free milk for all students in ECDE schools in his run for governor of Uasin Gishu.

He ran Buzeki Dairy that was bought by Brookside Dairy; he has many other business interests.

The businessman-politician is running as an independent candidate. He will face UDA's Jonathan Bii, popularly known as Koti Moja, and former CEO of ADC William Kirwa who has the Azimio ticket.

Buzeki narrowly lost in his run for governor in 2017 to Jackson Mandago, who now is running for Senate.

Buzeki has promised to revamp the dairy sector and the entire agriculture sector if he wins.

The independent candidate is so far the only one campaigning extensively on his manifesto at the grassroots in the county. So far, instead of addressing big rallies, he has focused on the grassroots and talking to voters.

Bii’s camp plans to release their manifesto soon ahead of intensive campaigning.

“Leadership is about the people and we are busy engaging residents with our manifesto so they can hold us responsible for our promises," Buzeki said.

Buzeki on Tuesday took his took his campaigns to Kapseret subcounty where he promised to focus on key sectors to uplift lives.

His areas of focus are healthcare, water, education, agriculture, trade and small-scale traders.

“We will also seek to bring on board key investors to create jobs and help expand Eldoret town into a major economic hub," Buzeki said.

He said he would strictly implement all details of the manifesto and aim to transform the county within the first five years in office.

Concerning the dairy sector, he said all ECDE pupils will get free milk.

He also promised to further automate the dairy sector for easier, more reliable and faster payments to farmers.

The businessman promised to absorb and train young people without proper education so they can form the human resources that will drive the dairy industry.

The region has attracted more than 100 independent aspirants, including  Francis Murgor who will be vying for the Kapseret MP seat.

Nandi county has more than 60 independent candidates, including former Governor Dr Cleophas Lagat who is running against Governor Stephen Sang of UDA.

Observers say some independents so strong it will take DP's hand to tip scales.
Counties
3 months ago

Nickname coined by rivals saying he only owned one coat but he made it his slogan.
Counties
3 months ago

Says he wants to transform county into a wealthy region with unique environment for flourishing trade and jobs.
News - Page 1
4 months ago