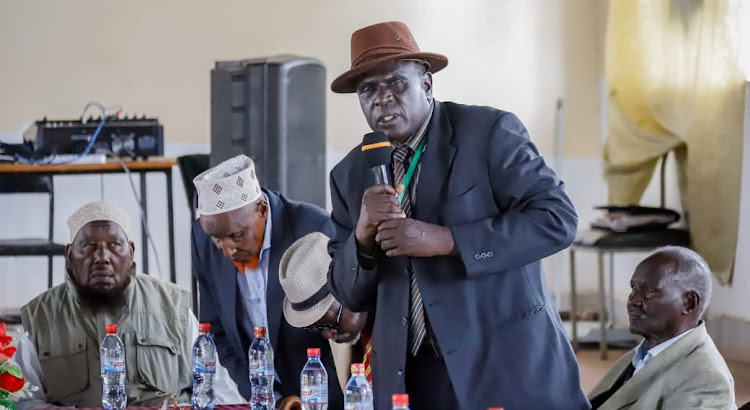 ELDERS: Elders at a meeting when they visited the Chebororwa Agriultural Training Centre in Uasin Gishu on June 10
Image: MATHEWS NDANYI

Governor Jackson Mandago of Uasin Gishu and elders have demanded a swift probe into claims of militia training at the county's Agricultural Training Centre.

Mandago has been summoned twice.

He and his colleagues denied any wrongdoing or incitement.

Detectives from regional headquarters questioned the trio for six hours in Nakuru over claims they were linked to the training of militia at the college.

Police allege the governor was actively sponsoring, arming, and training a militia at the Chebororwa College ahead of the August 9 polls.

On Friday Mandago and elders visited the college and dismissed the claims, urging police to take action against those spreading false claims about militia training.

“We want the truth to come out and that is why we urge the DCI to hasten their investigations and take action against those who made the claims," Mandago said.

The governor has said several times the college has been used to train county staff, including askaris. They recently have taken refresher courses at the institution that has conference and boarding facilities.

He blamed his problems on political rivals and adversaries, including independent governor candidate Kiprop Bundotich Buzeki.

Buzeki rubbished Mandago's claims and told the outgoing governor to carry his own cross.

"I don't work with the DCI and they know why they summoned him. Let him carry his own burden," Buzeki said.

The outgoing governor claimed the summonses were part of a plan to target UDA members supporter Deputy President William Ruto.

Mandago accused Buzeki and his allies of misleading the DCI with wrong information about a militia training.

“This is the second time I have been summoned here. The the DCI should stop harassing the members of the Kenya Kwanza team.

"I have been here for most of the day to block me from campaigning against state-sponsored candidates,” Mandago said.

The governor  asked Buzeki to face off with UDA nominee for governor  Jonathan Bii, popularly known as Koti Moja for wearing the same jacket most of the time.

After being cleared by the IEBC last Saturday, Buzeki accused Mandago of sponsoring his relatives to take over the county leadership.

"He has mismanaged the county and now wants his relatives to take over so they protect him," Buzeki said.

The businessman has accused Mandago and the UDA team of panicking after sensing possible defeat in the governor's race.

Elders in the county said the claims of training of militia were a threat to peace and unity.

The elders also want anyone undermining peace and cohesion in the county  barred from running for election.