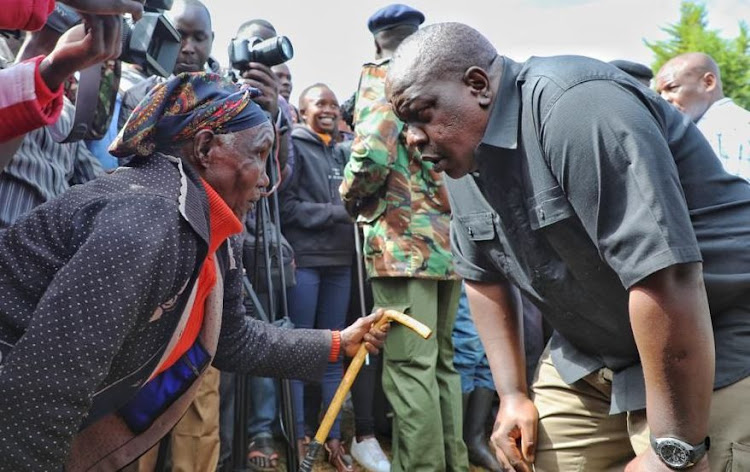 CS for Interior Fred Matiangi talks to a resident in Kerio Valley on June 8
Image: BY MATHEWS NDANYI

Interior CS Fred Matiang'i has promised a “painful” security operation in Kerio Valley to get rid of bandits, who have killed more than 107 people in six months.

Matiang’i toured the banditry-prone region on Wednesday and ordered an overhaul of security teams, saying some had neglected their duties.

He met elders and visited the families of three children killed last week in a bandit attack at Tot, Elgeyo Marakwet

“We cannot accept to have criminals amidst us who target school children in buses. Such buses do not carry cattle and we will not allow that,"  Matiangi said.

“We have to say the truth because some team leaders and security officers have not acted as required and we are bringing in new ones to enforce security," Matiangi said.

He said some security officials even failed to act on intelligence information, allowing bandits to terrorise residents.

“I have told the elders that it’s going to be a very painful but necessary operation so that we deal with menace once and for all,” Matiangi said.

He condoled with the families who lost their relatives and regretted that they had to endure the pain.

Mating'i said there would be a frequent review of deployment in the region following the declaration of a 30-day curfew in Elgeyo Marakwet, West Pokot and Baringo counties.

“We have done everything possible to resolve this problem before and we are determined to get it right this time. We have put on notice chiefs and other officers to do their work or be held responsible,” Matiangi said.

He said the curfew will facilitate a thorough disarmament operation targeting illegal guns, which he said are being used to terrorise residents.

Civil society groups estimate that the region has more than 50,000 illegal small arms in the hands of bandits and civilians.