Nurses in Nakuru held a peaceful walk and offered free check-up services to the public.

Nakuru Level 5 Hospital, chief nurse Wendy Tirop on Thursday lauded the hospital nurses for their being selfless in giving their services to patients as they marked Nurses International Day. 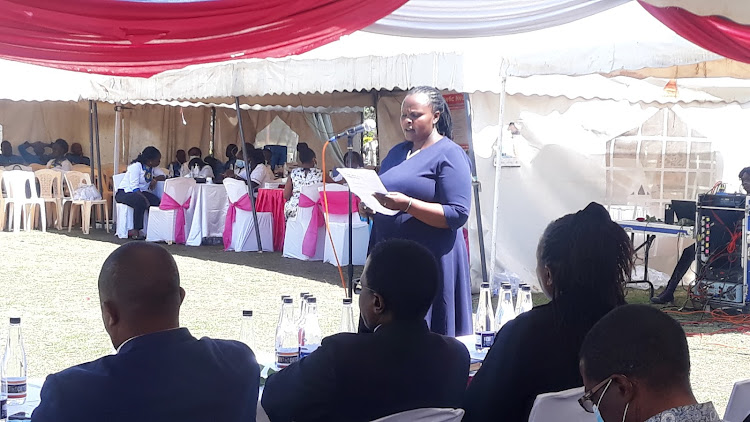 NURSES Chief Nursing Officer at the Rift Valley Provincial General Hospital addresses fellow nurses and members of the public during the International Nurses Day celebration in Nakuru on May 12, 2022.
Image: LOISE MACHARIA

Nurses in Nakuru had a peaceful walk along the streets passing through Kenyatta Avenue all the way to the Rift Valley Provincial General Hospital to commemorate this year’s International Nurses Day.

County Executive Committee Member for Health Jackeline Osoro who is also in charge of Public Service Training and Devolution said the celebrations were in honour of thousands of nurses who work tirelessly to save lives.

She said the day is meant to recognize the nurses’ important role in health services, their contribution and commitment that touches the individual, family and community.

Osoro observed that a nurse deals with patients on an individual basis and gives special insights into their specific needs.

“This makes them the advocates of the patients in the healthcare setting,” said Osoro.

He was accompanied by Nakuru Chief officer in charge of Health Daniel Wainaina and Rift Valley PGH Medical Superintendent Aisha Maina among other senior medical staff in the county.

She said the National Nurses Week honours the energy and dedication of the healthcare professionals who selflessly volunteer their time to help others as they mostly work extra-ordinary long hours without Sundays or holidays.

The National Nurses Week was launched in Kilifi were nurses from all over the country gathered to kick off the celebrations with the climax being held in Kericho on Friday.

She noted that to celebrate the week, the nurses in Nakuru gave back to the society through Corporate Social Responsibility by visiting two children’s homes adding that the act was a spirit to be emulated by all.

The CECM said even on a day aimed at celebrating them, nurses at the Rift Valley Provincial General Hospital opted to enjoy doing what they do best by offering free check-up services to the public.

“They give up their comfort and work tirelessly to ensure that all remain healthy,” said Osoro.

Osoro who recently took over the health docket in an acting capacity said there were 1460 nurses in Nakuru county with 413 of them having been employed on a contract basis.

She revealed that the issue of nurses on a contract having no payslip was being dealt with by the county government in collaboration with the national government through the Ministry of Health.

“Because payments and payslips are generated from Public Service Department, Governor Lee Kinyanjui together with the Human Resource and the Chief Officer in charge of Health went to the Ministry for a so as to get a code and scheme fitting the affected groups,” she said.

She added that Permanent Secretary in the Health Department offered a solution adding that the bio-data of the nurses on the contract had been processed to be on the payroll by end of June.

On shortage of nurses, she said the county was looking into hiring more nurses on permanent and pensionable terms to replace the retired ones.

Sakaja promised that his administration will ensure funds are available.
Counties
1 week ago

The nurses will be recruited by NHS in United Kingdom over a period of three years.
News
2 weeks ago
“WATCH: The latest videos from the Star”
by LOISE MACHARIA
Rift Valley
12 May 2022 - 21:29