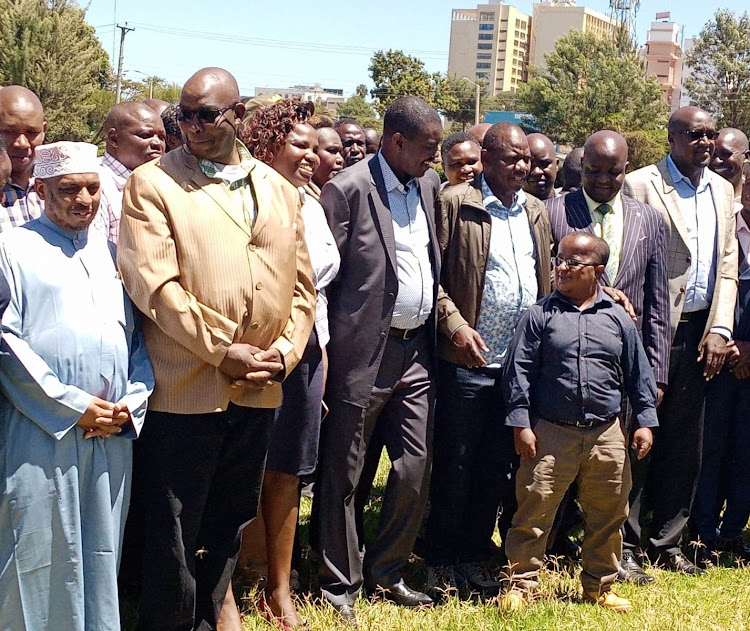 HEALING: Uasin Gishu Governor Jackson Mandago (C, in white shirt) with religious leaders and UDA nominees and losers after a meeting at the TAC centre in Eldoret on May 10
Image: MATHEWS NDANYI

Winners and losers in UDA primaries in North Rift will meet to iron out their differences and agree on how to campaign for Deputy President William Ruto and the Kenya Kwanza team.

Governor Jackson Mandago of Uasin Gishu said the meeting will help heal the bitterness arising from the primaries so all leaders can focus on the August 9 polls to ensure Kenya Kwanza wins.

“We need to focus on the win so that we together form the next government at all levels and ensure all Kenyans benefit,” Mandago said.

He spoke in Eldoret when leaders, including the UDA winners, losers and religious leaders, met at the TAC centre to inspect the venue for a thanksgiving rally on Sunday.

The rally to be attended by all UDA nominees for the region and party leaders will be hosted by Jonathan Bii, the governor nominee for Uasin Gishu.

Among top Kenya Kwanza leaders invited to attend include ANC party leader Musalia Muadavadi, his Ford Kenya counterpart Moses Wetang'ula, Machakos Governor Alfred Mutua, UDA leaders from Mt Kenya and many others from across the country.

“Our main aim is to thank God and pray he guides us to go through the August 9 elections peacefully," Mandago said.

He said it was understandable that losers had bitter feelings but advised them to take heart from the experiences of some winners like Jonathan Bii who had run unsuccessfully for election for 20 years.

“Bii has vied for the MP position more than four times and failed but he never gave up and this time God guided him to try the governor seat and he now has made it in the primaries," Mandago said.

He said the focus during the Sunday meeting would be prayers and not politics.

Religious leaders, including chairman of the Muslim Preachers and Imams in the region Abubakar Bini, urged them not to mix bad politics with religion.

“If we say it's prayer and thanksgiving, then it must remain so and we do not expect the meeting to be turned into the kind of politics that will not unite our people and foster peace," Bini said.

Mandago also praised the media for balanced coverage of the campaigns, especially within the last month. He said all formations had been given good coverage by media outlets.

“If our media continues that way, then we will give Kenyans a chance to make informed decisions ahead of the polls," Mandago said.

They will unveil the candidate they are backing in two days.
Counties
2 weeks ago

They defeated a number of men including veteran politicians.
Counties
2 weeks ago

Nakuru county hopefuls who lost in UDA primaries unite to popularise DP Ruto.
R.Valley - Page 30
2 weeks ago
“WATCH: The latest videos from the Star”
by BY MATHEWS NDANYI AND SOPHY ADHIAMBO
Rift Valley
11 May 2022 - 22:00