She would have achieved better grades had life at home been better, her teacher said.

• Christine Atayi, 16, from a family of six is just one of many uncounted girls and boys who cannot continue their education for lack of school fees.

• She sits listlessly at home, barely eating, as she considers what the future holds. She looks desperate. She has not reported to school two weeks after deadline. 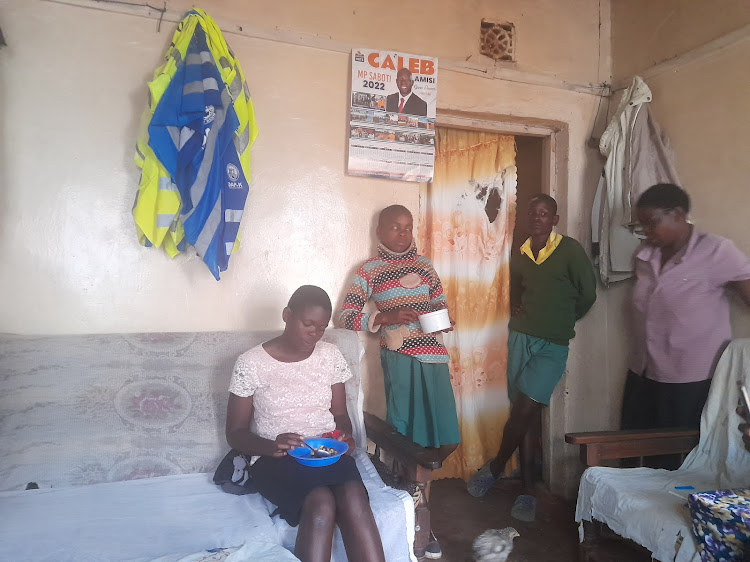 Through sheer determination, Atayi walked through the dark corridors of crime-infected slums every morning to get to school early enough for preps.

The 16-year-old second born in a family of six is one of many uncounted girls and boys from disadvantaged backgrounds who many not realise their potential and live a full life.

Listlessly Christine picks at her plate of githeri at the family’s rented house in Matisi location in Saboti subcounty in Trans Nzoia.

"She is hardworking, intelligent and daring to achieve her goal in life no matter what," class teacher Mary John said.

"The girl had to bear with the little her father, who is a boda boda rider, gets from a rented motorcycle to take care of the family.

"This is a truly hardworking girl from a poor background who has been surviving on meals thanks to teachers who teamed up to start a feeding programme for vulnerable learners so they can concentrate on studies," she said.

Head teacher Samson Changarok said the Kenya Agricultural and Livestock Research Organisation (Kalro) enabled many of the pupils to get food from a two-acre farm given to the school to plant maize. They come from the neighbouring slums of Shanty Point, Kipsongok and Mitume.

"Many of these children from poor, troubled backgrounds are able to remain in school because of the food we offer them. We thank Kalro," he told the Star.

Marongo said her husband is struggling to pay school fees for four of Atandi’s other siblings, including her elder brother in Butere Boys High School in Khwisero.

"My husband has reached a point where he is completely unable to raise money for school fees for the five children since the hired motorcycle cannot generate enough to cater for the family. We have no place to call home and we survive from hand to mouth," she said, weeping.

Then Atayi began to wail.

"I’m saddened my daughter has not reported to Form 1 to continue with her education. Just look at this dejected girl and ask yourself how you would feel if it was your own daughter staying at home while others learn," she said.

She said her efforts to reach the area leadership for bursary assistance failed after she was told to take the girl to school awaiting disbursements after the new financial year.

"There is no possibility of my daughter getting bursary allocations from the office of the MCA, MP and governor," she said.

"I don't see my girl going to school unless God sends a good Samaritan to come to her rescue."

50 needy learners in Kilifi get full scholarships from Centum

More than 5,150 students in national schools who are under the county's full sponsorship are set to benefit from the programme.
Counties
2 weeks ago

The programme, which began four years ago, has 1,493 students as beneficiaries.
Counties
3 weeks ago
“WATCH: The latest videos from the Star”
by DAVID MUSUNDI
Rift Valley
11 May 2022 - 22:00