If all goes well, the young women will marry of their own free will and then bear children

•The girls celebrated their mentor Hellen Nkuraiya for ensuring they went through primary and secondary school without problems.

•Hellen,the school director, is known in the Maasai community and across the globe because she fights for girls' right and against FGM. 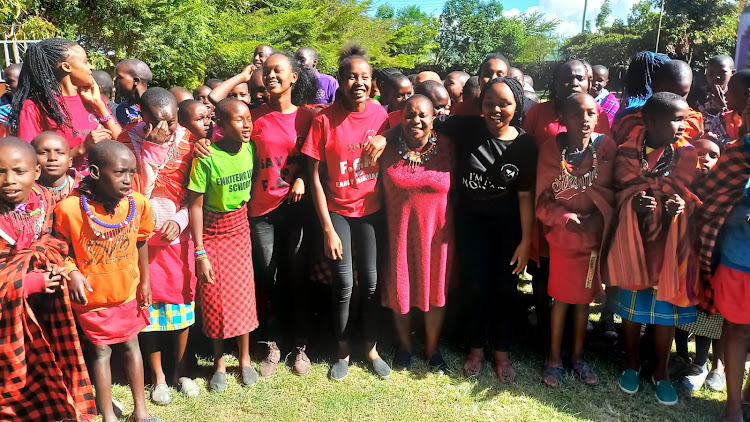 It was a very happy Mother's Day on Sunday at  Enkiteng LEPA school in Narok South when former students celebrated with the institution's founder who rescued them from FGM.

And the young participants were grateful they were saved from early motherhood and given a chance for education.

The girls, who were saved from FGM, teen pregnancies and forced marriage, wore T-shirts about fighting FGM and child marriage.

They celebrated their mentor Hellen Nkuraiya for ensuring they went through primary and secondary school without problems.

They sat their KCSE exams.

Hellen, who is the school director, is known in the Maasai community and across the globe, because she fights for the rights of girls and women and against FGM and related ills.

She is the founder of Enkiteng LEPA school, which means Our Cow School.

The school’s motto is, “Don’t Exchange Girls for Cows, Give Them Education." The motto refers to the practice of marrying off girls in exchange for dowry.

The school started as boarding school to educate and protect young Maasai girls from early marriage.

It is located at Maji Moto area of Narok South on the outskirts of Maasai Mara Game Reserve. 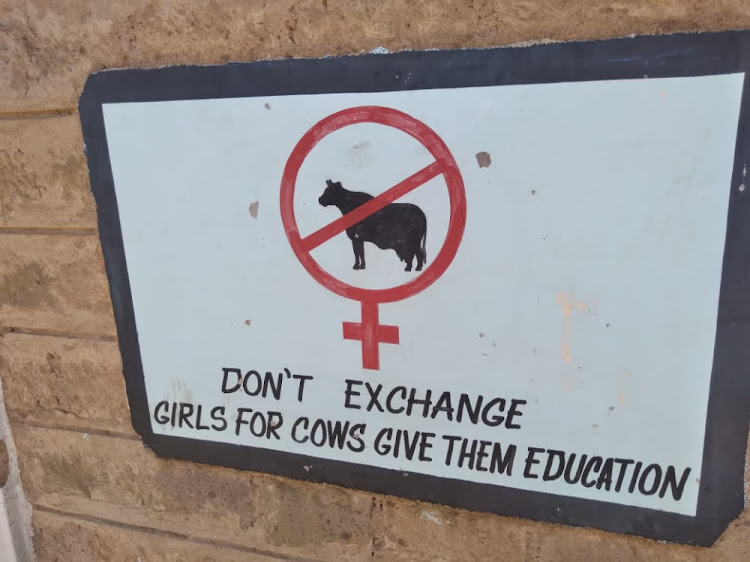 Former students talk to pupils and equip them with skills needed to tackle the pressure  for FGM, child marriage, child labour, how to say no and avoid teenage pregnancies. And how to face education with confidence.

One alumna, Naomi Kalasinga, said they decided to celebrate her during this Mother’s Day as she took care of them primary and secondary even during the tough time of the corona virus pandemic.

“Hellen is more than a mother, she has been around and assisting us throughout our lives this far, are good fortune is a result of her efforts and passion,” Naomi.

She added that the activist gives them advice during primary and secondary education that helped them in education and other challenges.

Siamanta Masikonde,who was to be married off at 10 years, said they appreciate Hellen's exemplary services to them and the whole community.

She urged girls from the Maasai community to give education priority as FGM, pregnancies and early marriage have compromised their future and the practices must be stopped.

Simanka Kolii urged girls to put efforts into their learning as it will change their lives for the better.

“We must convince our people of the importance of educating girls,”Simanka said.

Hellen said her efforts to ensure the girls stay in school are now bearing fruits.

She said the fight against FGM is on the right track and praised the government's efforts for commitment in ending mutilation.

“We need to support our president to end FGM by this year because we have capacity and when we work closely with the government by providing information on those still practicing the vices, it will come to end,” Hellen said .

In 2019, President Uhuru Kenyatta said he wanted to see an end to female genital mutilation by the end of 2022.

FGM and early marriages are rampant in Narok due to social and cultural beliefs. Drought and poverty make 'sell' their daughters for cows and relieve them of the burden of caring for them.

Arrest and prosecution of FGM and early marriage are met with stiff resistance. It is difficult secure convictions due to lack of cooperation of family and witnesses who are compromised, threatened and could go to jail.

Due to pressure from the community and their peers, girls and even women undergo the cut to gain social acceptance. Uncut girls are not considered women and are not 'fit' for marriage.

After the government shut schools in early 2020 due to Covid-19 pandemic, scores of people were arrested in most of the six subcounties in Narok for allegedly engaging in FGM. Some cases are still pending in court.

Some pleaded guilty to the charges and ordered to pay a find of Sh200,000 each or serve three years in jail.

FGM was outlawed in Kenya in 2001 under laws that prohibit customs harmful to children and under the FGM Act, 2011.

The practise is still rampant among Kenyan communities, with the Somali community leading in the practice by 94 per cent.

They are closely followed by Samburus at 86 per cent.

The Abagusii and Maasai communities are third and fourth in FGM, with a prevalence of 84 and 78 per cent, respectively.

State to intensify war on FGM in Narok

FGM is illegal, can be deadly. damages health, ends education.
Counties
3 months ago

Lari residents living in fear after discovery of FGM tools

The culprits have been arrested.
Counties
1 month ago

Women fear for safety in the coming elections

With rapes rising in election years, some are fleeing to ‘neutral’ areas
News
2 weeks ago
“WATCH: The latest videos from the Star”
by KIPLANGAT KIRUI Correspondent
Rift Valley
09 May 2022 - 22:00