• Gumo rubbished claims by Ruto that the President had taken his job and given it to someone else.

• "You (DP Ruto) decided to abscond the duties assigned to you by your boss and now you are crying your duties were transferred", he said. 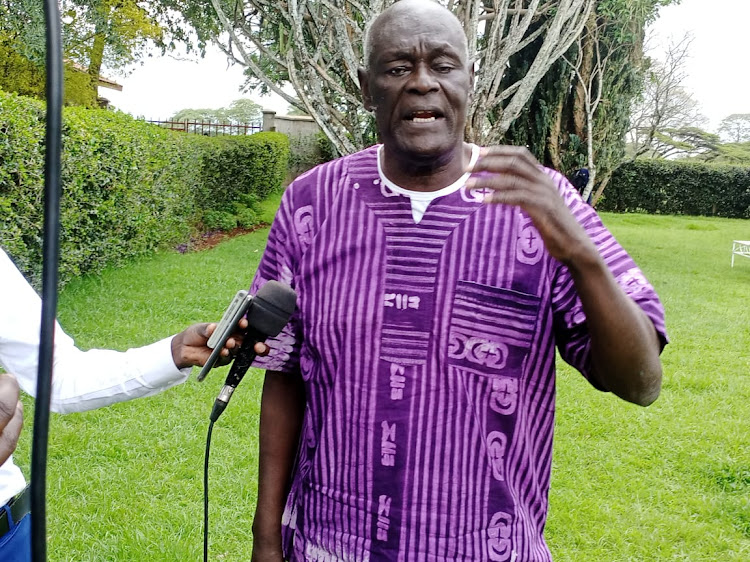 Gumo rubbished claims by Ruto that President Uhuru Kenyatta had taken his job and given it to someone else.

“You (Deputy President William Ruto) decided to abscond the duties assigned to you by your boss, President Kenyatta," he said on Tuesday.

"And now you are crying from the top of your voice that your duties were transferred to someone else," Gumo said.

He was speaking during a meeting convened by members of the Abaluhya Consultative Forum in Endebes.

He said it was indeed the Deputy President who defied instructions from his boss to work and instead chose to loiter all over (kutangatanga).

Two cattle joined to one yoke cannot plough when one comes from behind stabbing one of them with a spear from behind. This is what became of President Uhuru, leading to the derailment of his projects

"It is hypocritical for someone to start crying at the top of his voice trying to whip up sympathy from the very same Kenyans whom he stopped working for. This country is bigger than anyone," he added.

The former Minister said that the Country’s No. 2 number two had indeed absconded duty and was now shedding crocodile tears to to get taxpayers' money he was using to undermine his boss.

"You are staying in a government house in Karen, you are using government vehicles and security on top of the huge salary you are drawing. Were the same privileges taken away from you?” Gumo asked .

Without naming names, Gumo slammed a section of the political class whom he claimed had started sending fears of expelling members of one community for not subscribing to their political inclinations.

"To those threatening to expel some communities they feel don’t support their cause, they will end up in the hands of law enforcers. We all bought land here and we are here to stay," he said.

He said Trans Nzoia is a totally cosmopolitan county and those hell-bent on planting seeds of discord amongst peace-loving citizens should be dealt with by law enforcers.

He asked residents not to fall prey tp some politicians whose interest is to incite them against each other.

"Two cattle joined to one yoke cannot plough land when one comes from behind stabbing one of them with a spear from behind. This is what became of President Uhuru, leading to the derailment of his projects,"Gumo said.

The elders who were led by John Makomboti affirmed that they will all be campaigning for the Azimio la Umoja presidential candidate Raila Odinga.

He says MP Kuria should focus on the needs of his constituents.
Counties
1 month ago

The tensions building up between Uhuru and Ruto must be brought under control.
Opinion
2 weeks ago

You pushed Ruto out of government, UDA tells Uhuru

Kiharu MP Ndindi Nyoro said they campaigned for the duo but once it was voted in, they were sidelined
News - Page 7
2 weeks ago

Magero says he won the ODM primaries and should be therefore be given the ticket.
News
3 weeks ago
“WATCH: The latest videos from the Star”
by DAVID MUSUNDI
Rift Valley
04 May 2022 - 22:00