They are detained at the Isinya Police station.

• The suspects were nabbed as they tried to sell a stolen cow at the Isinya slaughterhouse at 7 am, after they failed to prove ownership.

• Isinya Subcounty Commander Ancent Kaloki confirmed the arrest, saying that the six will be arraigned in court as soon as their charge sheets have been prepared by the Directorate of Criminal Investigations office. 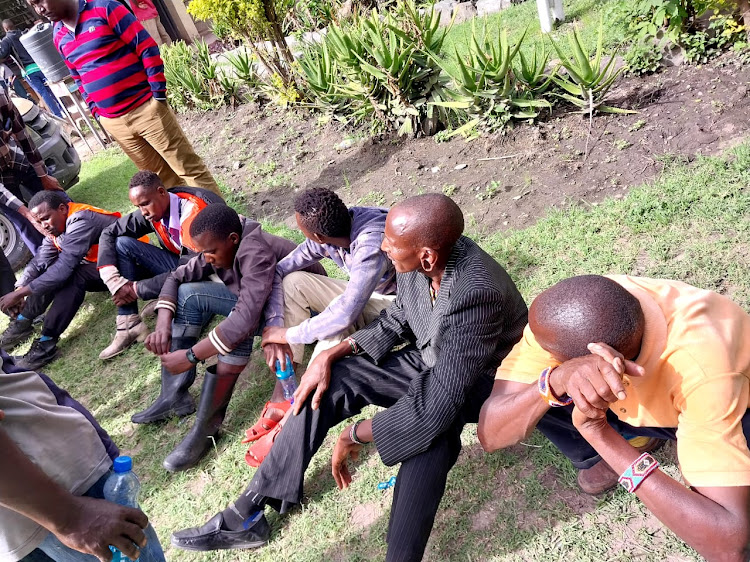 The six suspected rustlers were cornered at the Isinya slaughterhouse on Tuesday after they failed to prove ownership of a cow they wanted to sell.
Image: KURGAT MARINDANY

A day after farmers called for the removal of the Isinya Police Commander over livestock theft, six suspected rustlers have been arrested.

The suspects were nabbed as they tried to sell a stolen cow at the Isinya slaughterhouse at 7 am, after they failed to prove ownership.

They are being detained at the Isinya Police station.

The owner of the cows had woken up early and rushed to the slaughterhouse in Isinya with the hope of identifying his stolen cow.

Isinya Subcounty Commander Ancent Kaloki confirmed the arrest, saying that the six will be arraigned in court as soon as their charge sheets have been prepared by the Directorate of Criminal Investigations office.

The farmers in the Kisaju area had on Monday, May 1, demanded the sacking of Kaloki for allegedly abetting rustling.

They also called for the transfer of area DCI boss over the same claims.

Kaloki was on Friday last week involved in a gun drama incident, as he chased away protesting livestock farmers at Isinya Police station. 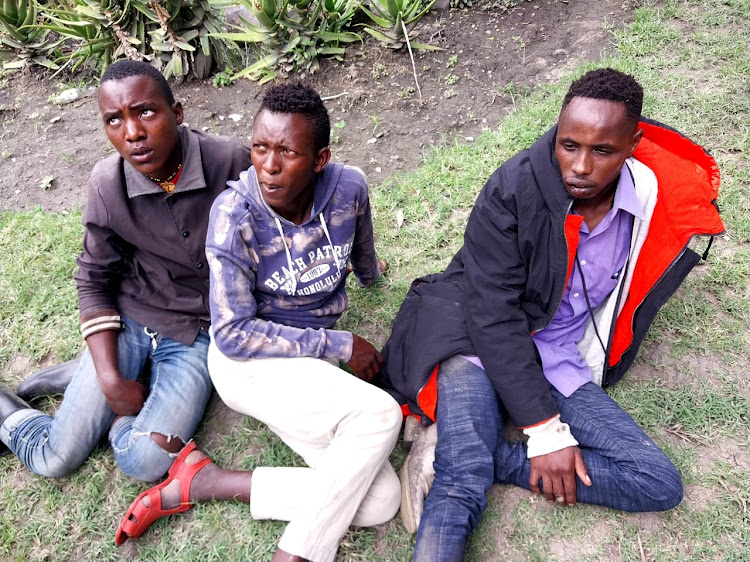 Three of the six arrested suspected rustlers before they were handed over to Isinya police station on Tuesday.
Image: KURGAT MARINDANY

The farmers demanded to know those involved in livestock theft had not been arrested and yet they had provided the registration number of a vehicle used to ferry stolen sheep and goats to Nairobi.

Kaloki is alleged to have drawn out his gun and pointed it at the farmers who had gathered at the station to demand answers to their questions.

The police officer is also alleged to have threatened to confiscate cameras from the journalists covering the event.

On May 2, one of the elders chased away by Kaloki, Mokira Oloyondi, 75, told the Star that he had lost 70 cows and 78 sheep and goats in the last three months.

“My livestock were stolen and carried away in trucks through all the police roadblocks mounted between Isinya and Athi River. We are demanding to know why charcoal traders are arrested on those roadblocks and not live cows and goats?” Oloyondi posed.

He further claimed that police officers in Isinya, Kisaju, and Kitengela are busy raiding bars every evening to collect “protection” money from the owners under the watch of Kaloki.

The Star sought a comment from Kaloki via phone over the claims, he hurled unprintable insults, adding that he does not deal with the media.

The farmers claimed they have so far reported 17 cases of livestock theft to Isinya police station and no action was taken.

Mwongera lamented that some of the rustlers arrested or handed to the police had their cases dropped by the same complainants.

“When our officers take those cases to court, the same complainants claim they are their sons and withdraw the cases."

•Kaloki was involved in a gun drama on Friday last week when he chased away the livestock farmers protesting against cattle rustling. • On May 2, an ...
Counties
1 month ago

The curfew is to allow the security forces deal with criminal activities there.
News
1 month ago
WATCH: The latest videos from the Star
by KURGAT MARINDANY Correspondent
Rift Valley
03 May 2022 - 17:48