• Uasin Gishu county, which is Deputy President William Ruto's home county, is expected to witness a tough contest between his allies and independent candidates.

• Analysts say if UDA does not sort out issues of discontent among aspirants who claim they lost unfairly in the primaries, the backlash will benefit independent candidates. 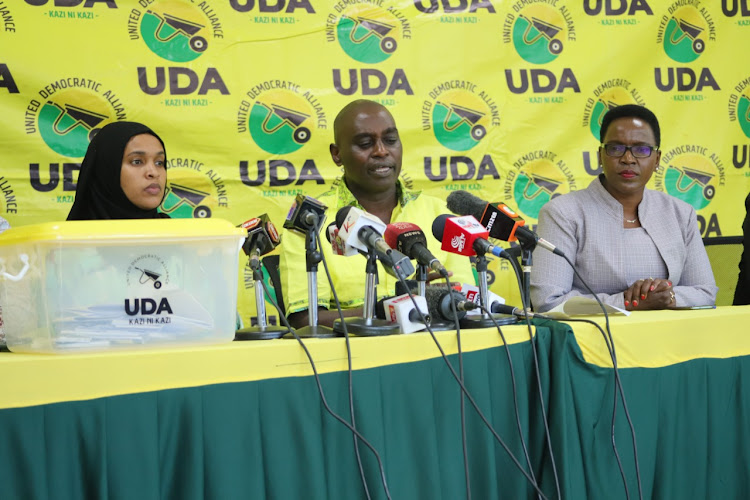 Independent aspirants are gearing up for a bruising battle with UDA hopefuls who were nominated in the just-concluded primaries.

Uasin Gishu county, which is Deputy President William Ruto's home county, is expected to witness a tough contest between his allies and independent candidates.

"Now that the primaries are done, I will be on the ground starting this week," Buzeki said.

He is expected to mount a massive and well-oiled campaign.

Analysts say if UDA does not sort out issues of discontent among aspirants who claim they lost unfairly in the primaries, the backlash will benefit Buzeki and other independent candidates.

Aspirants who lost the UDA ticket for Uasin Gishu governor did not accept the results, claiming there were massive irregularities. Their supporters could be swayed to back non-UDA candidates.

"We will take the win and we are ready to work for it just like we did in the primaries," Bii said.

Another race to watch is in Kesses constituency where MP Swarrup Mishra will run against UDA's Julius Rutto.

Mishra will run as an independent and considering his massive resources he will also fight against DP Ruto's influence in the area.

UDA aspirant Rutto is a political greenhorn but he will enjoy the popularity of the party in his bid to unseat Mishra.

Also running as an independent candidate is Moiben MP Sila Tiren, who will be defending his seat against a UDA aspirant.

Senator Margaret Kamar, who has taken a low political profile this year, has not confirmed reports that she will be vying as an independent candidate.

Governor Jackson Mandago won the UDA ticket for the Senate race in Uasin Gishu amid allegations of irregularities in the primaries.

His opponents, led by lawyer Kipchumba Karoli, rejected the results and are expected to announce their next move.

Meanwhile, Marakwet Deputy Governor Wesley Rotich, who won the UDA ticket for the governor's race in the county, has thanked residents for supporting him.

"I'm grateful for the great honour bestowed on me by the great people of Elgeyo Marakwet," he said after receiving the UDA nomination certificate.

He defeated former IG Joseph Boinnet and several other aspirants who were seeking the UDA ticket to succeed Governor Alex Tolgos.

Allies of Boinnet claimed the primaries were not free and fair, but UDA officials said the exercise was credible and verifiable.

Mogotio, Kamukunji and Roysambu will have repeat primaries.
News
7 months ago

UDA satisfied with primaries in Ruto's backyard despite protests