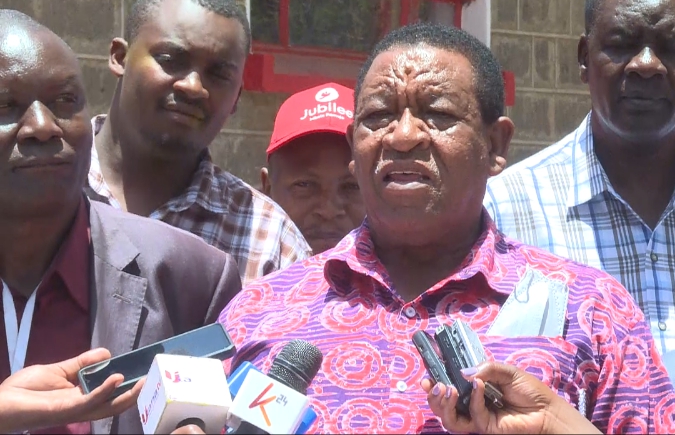 TONE IT DOWN: Njenga Mungai, chairman of the Jubilee Council of Elders, speaks to the press on March 16.
Image: JAMES MUNYA

Chairman and former Molo MP Njenga Mungai said on Wednesday the remarks were made to demean a sitting head of state and the presidency.

Speaking in Nakuru, the council also condemned the Mt Kenya leaders who made scathing remarks against the President and his record at the same event attended by 5,000 people.

They said these topics were not supposed to be raised at an NDC.

Ruto was given his party's blessing to run for president.

Mungai said the UDA National Delegates Conference ought to have discussed issues affecting the people but not the head of state.

“What these people went to do there is not what the NDC is all about," he said.

"They went there with the sole intention of attacking and  discrediting the President and his administration that his deputy has been part of."

He said if the DP were genuine, he could have raised the issues a long time ago. "The President didn't abandon him but rather had a handshake that brought onboard Raila Odinga for the sake of peace."

Mungai said words can incite and divide people, which only hurts Kenya.

He also said  the Kenya Kwanza alliance was not genuine in condemning corruption when some of its members have been mentioned in many  cases.

Kimani Maigwa, national chairman of the Kikuyu Council, condemned Mt Kenya leaders who attacked the President, whom he called a symbol of unity.

“We have not heard those in Nyanza unhappy with Raila Odinga  insulting him nor those not happy with William Ruto from the Rift Valley talking ill about him," he said.

"So what's happening in Mt Kenya? We have a problem in that region," Waigwa said.

He also condemned those saying the election would be rigged in favour of President Kenyatta and Raila. If anyone has evidence, they should table the evidence with the IEBC, the chairman said.

They spoke several days after MP Kimani Ngunjiri who hails from the same county and is an ardent supporter of William Ruto, said they will expose the President's misdeeds to the public.

Kimani, speaking a day before the NDC, said the Kenya Kwanza Alliance has a dossier that they will release to the public, demonstrating how the President has 'plundered' the country.

“The president took the bait and decided to endorse Raila Odinga, he is where we are now. He has decided to campaign and therefore we will deal with him as such. We have a lot to say about him.” Kimani said.

He added that the President had made scathing attacks on the Deputy President during Sagana III and the Azimio Delegates Conference.

Kimani said Uhuru should not be surprised when the same is unleashed on him.

Ruto dared to resign after attacks on Uhuru, State at UDA NDC

Ruto said the two Handshake brothers are not familiar with poverty.
News
4 months ago

Nyoro said that Ruto’s brigade has disregarded Uhuru and undermined his office
News
4 months ago
“WATCH: The latest videos from the Star”
Njenga Mungai, Chairman council of elder, Jubilee party. Speaking to the press on March 16.
by James Munyua
Rift Valley
18 March 2022 - 01:59