Former CS for Petroleum and Mining running for governor of Turkana 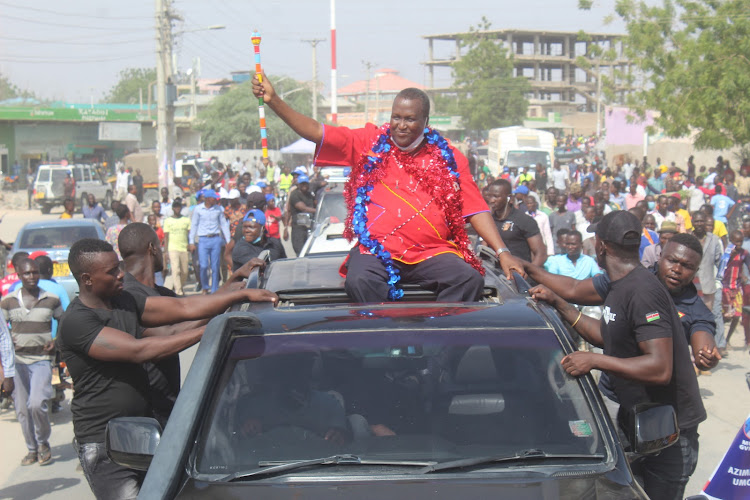 I PLEDGE: The former Cabinet Secretary for Petroleum and Mining John Munyes at Lodwar town during his homecoming.
Image: HESBORN ETYANG

He resigned from the Cabinet on February 8 to campaign.

Munyes deplored that Turkana county has received many billions of shillings for development but the money has done little to improve the economy and reduce poverty.

“I’m seeking this top seat to elevate my people from the aftermath of poverty and hunger. I’m convinced Azimio La Umoja is the government that will address the issues of our people,” he said.

He spoke during his homecoming celebration at Lodwar.

The event was attended by  Defence CS Eugene Wamalwa, who urged the Turkana people to elect Munyes.

Munyes faulted the government of Josphat Nanok for not improving residents' lives.

He said the county also receives a lot of funding from UNDP, Oxfam and NGOs but development projects cannot be felt on the ground.

He said he is working closely with President Uhuru Kenyatta and ODM leader Raila Odinga because he believes Azimio La Umoja will form the next government and he does't want to see Turkana in the opposition.

“We have a lot of resources in Turkana, including tourism, that can generate revenue,We also border three countries, including Uganda, Ethiopia and South Sudan but we have not benefited. We need good governance to realise the potential."

At least six aspirants are seeking tickets to suceed Nanok who is aiming for a national seat.

Nanok said he want to stay active in politics and champion the interests of Turkana at the national level.

Others are Munyes and  Joseph Atol.

Turkana Senator Malcy Ekal shelved his ambition for the gurbernatorial seat and ditched UDA to join Azimio La Umoja. He is expected to defend his senatorial seat.

Nanok, former chairman of the Council of Governors, has a well-oiled political machine to promote himself and his preferred successor.

Joseph Atol is yet to name is party.

Nanok and Lodepe are allies and the governor is considered likely to endorse the lawmaker.

Victimised by Mother Nature and the worst of mankind but helped by Ted Cross.
Counties
11 months ago

Accounts must be at Central Bank of Kenya, except with treasury okay.
Counties
11 months ago