Number of illegal fishermen also declining, thanks to Coast Guard

• Ironically, the number of hippos is on the rise and experts call for a census.

• Hippos targeted illegal foot fishermen wading into their pastures, but the Coast Guard patrols have reduced both illegal fishermen and hippo attacks. 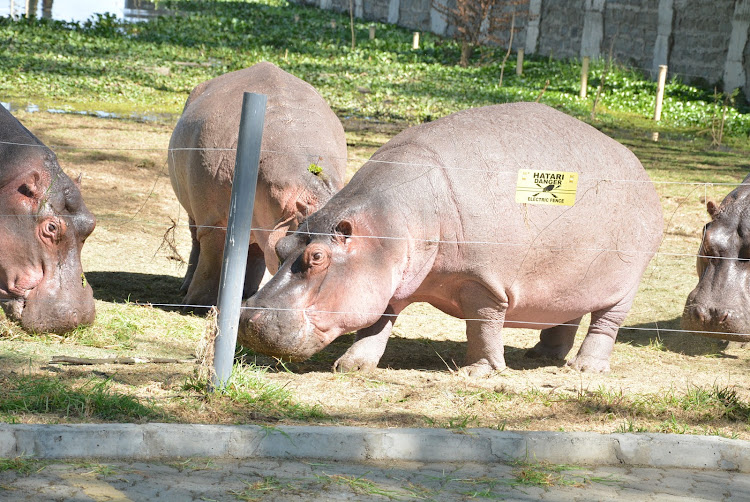 HIPPOS: Hippos feed on the shores of Lake Naivasha where cases of attacks are declining
Image: GEORGE MURAGE

Patrols by the Kenya Coast Guard in Lake Naivasha have greatly reduced both hippo attacks on illegal foot fishermen as well as the number of foot fishermen.

Since the year began, no attack has been reported compared to last year when more than 20 people were either killed or maimed by the animals.

The number of the illegal fishermen has dropped in the last six months due to Coast Guard enforcement, reducing the illegal foot fishermen and hence, the attacks.

The closure of wildlife corridors around the lake had also made the hippos hostile as they went in search of food.

Naivasha subcounty commissioner Mutua Kisilu said the Coast Guard patrols and enforcement measures were responsible for the decline in attacks.

Cases of illegal fishing had dropped by more than 60 per cent and there are plans to end them completely in coming months.

“The number of illegal fishermen has dropped due to increased patrols and this has also led to an end in cases of hippo attacks, which were the norm," he said on Wednesday.

Kisilu said plans were underway to issue 100 new fishing licences, some to foot fishermen who have formed groups.

The licensing is expected to help empower them and reduce crime levels around the town.

“We have not recorded any hippo attacks this year, but we are worried by the number of the roaming animals in nearby farms and estates,” he said.

Kilo, who is also an honorary warden, said a census by visiting scientists indicated the lake had one of the highest numbers of hippos in the region.

“We are asking KWS to conduct a fresh census and establish the real number of hippos around the lake," he said.

He admitted the closure of wildlife corridors coupled by rising water levels had reduced grazing grounds for the animals, making them hostile.

The right size of gillnets would ensure that fish stock is not depleted.
Counties
8 months ago

For the first time in recent memory five elephants invaded Naivasha on Dec. 28.
Counties
8 months ago
Post a comment
WATCH: The latest videos from the Star
by GEORGE MURAGE CORRESPONDENT
Rift Valley
02 February 2022 - 22:00
Read The E-Paper