•The excitement is heightening as UDA and ANC parties head for their first joint rally in Nakuru on Wednesday.

• UDA coordinators led by Paul Kiprop said the alliance was best placed to win the August 9 polls because many more Kenyans would join. 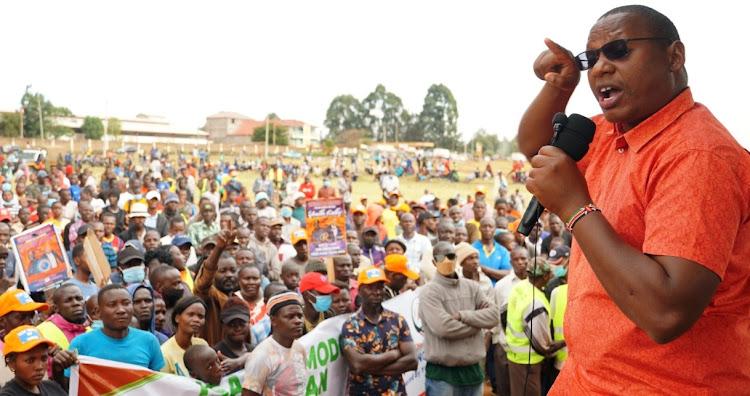 The new alliance between Deputy President William Ruto and ANC leader Musalia Mudavadi has energised UDA backers in Rift Valley who call it a game changer.

"It's clear we have a winning team that will liberate this country from its many challenges," he said.

Mandago said the new alliance had indeed caused a political tremor in the county, signalling that change was on the way.

The excitement is heightening as UDA and ANC parties hold their first joint rally in Nakuru on Wednesday.

UDA coordinators led by Paul Kiprop said the alliance was best placed to win the August 9 polls because many more Kenyans will join the new alliance.

"That was just the start because we will have a movement whose political force will be unstoppable," Kiprop said.

MPs Daniel Rono of Keiyo South and Caleb Kositany of Soy said Kenyans were tired of bad leadership and a collapsing economy, hence their strong will to change leadership.

"It is a break from the past where a few people want to use power to benefit themselves while Kenyans languish in poverty," Kositany said.

They spoke as ODM leader Raila Odinga's allies said he would get backing in the region considered a UDA stronghold.

"Baba has strong backing in this region and the numbers will tell at the end of the polls," MCA for Langas Francis Muya said.

Supporters of the Azimo la Umoja movement on Saturday held a well-attended rally at Huruma grounds in Eldoret where they pledged to campaign for Raila to change the region.

Revealed: How Raila, Ruto contest will be won or lost

Central Kenya, Western and Ukambani will be decisive in the presidential poll.
News
4 months ago

DP William Ruto is still well ahead with 46.1% support, according to the latest Radio Africa poll.
News
4 months ago

Don't risk all eggs in one hustler basket, Kalenjins told

Rift Valley not "locked" for Ruto and UDA, everyone free to campaign.
Counties
4 months ago

MAKODINGO: Why Ruto is opposed to Political Parties Amendment Bill

William Ruto is obsessed with the idea of a “National Party”.
Opinion
4 months ago
by BY MATHEWS NDANYI
Rift Valley
25 January 2022 - 06:40