Says coalitions are vital for Kenya as they ensure respect, stability and consultations within government 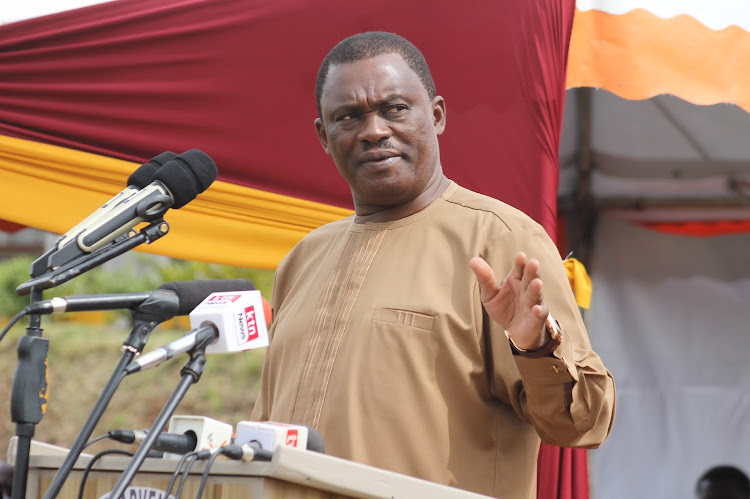 National Assembly Speaker, Justin Muturi has declared support for the Political Parties (Amendment) Bill 2021, saying it is good for the country.

Muturi said coalitions are vital for a country like Kenya as they ensure respect, stability and consultations within government.

"Coalition of political parties that eventually form government is good for the nation. These parties come together with different interests thereby ensuring dialogue and constant consultations," Muturi said.

The speaker spoke in Molo, Nakuru during an inspection tour of projects initiated by MP Kuria Kimani on Saturday.

The Political Parties (Amendment) Bill 2021 which faced major opposition from legislators allied to Deputy President's  United Democratic Alliance party has been passed by Parliament and is currently before the Senate.

The bill which was sponsored by National Assembly majority leader Amos Kimunya seeks to amend Clause 8, which sets the timeframe for coalition formation.

The bill had proposed at least six months before the August polls but he sought to reduce it to at least four months which is seen to favour Orange Democratic Movement leader Raila Odinga's Azimio La Umoja movement.

The bill also seeks to allow aspirants to vie either on individual party tickets or coalitions.

Muturi who has declared interest to vie for the presidency in August said all parties have equal rights because they are registered.

He said he was not a day dreamer adding that he has his eyes on the goal.

"I am vying on a Democratic ticket, the best political party that was started by former President Mwai Kibaki with the best policies to unite and build Kenya," he said.

Muturi said the Democratic party will have its National Delegates Conference next month after which he will commence his countrywide campaigns.

He pledged a 50 per cent waiver on party charges for all aspirants who will vie on its tickets.

Muturi at the same time asked members of the public to join in the fight against corruption through behavioural change.

"We have to start with the ill behaviour of always bribing for services which are basic human rights even as we fight the mega-corruption scandals," he said.

The speaker said the Big Four agenda and Vision 2030 could not be achieved with mega-corruption scandals and tax evaders that deny taking away money meant for development.

He called for concerted efforts from all the three arms of government in the fight against graft.

Says region has no shortage of leaders who can vie for the presidency.
News
3 months ago

"I challenge you, if you go to the ministry, you will not find his signature," Muturi.
News
3 months ago