NOWHERE TO TURN TO

Still, 640,000 people are at risk of starvation due to drought in the region 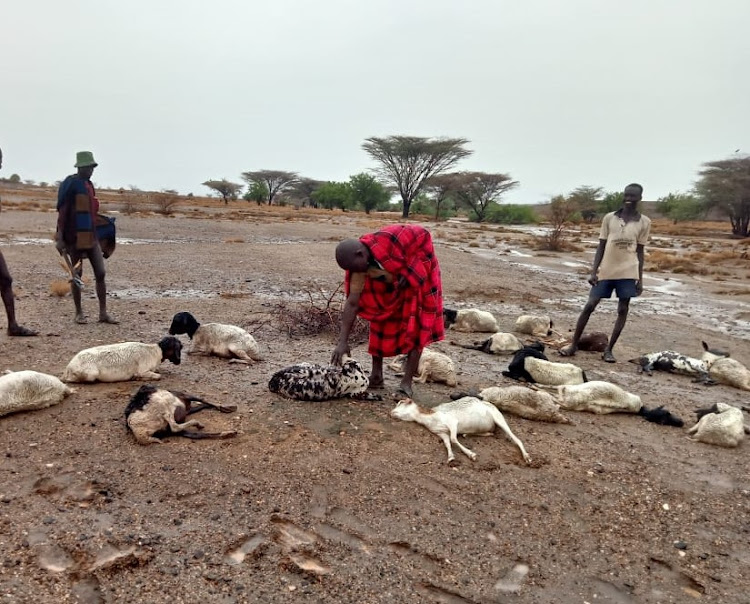 Floods have killed more than 500 goats and sheep in Turkana South this week.

Silvester Akolong, assistant area chief of Nakaalei, Kalapata Ward in Turkana South, said more than 400 families have been affected by the floods caused by heavy rains.

The drought had dried up most water pans, boreholes and other water sources that pastoralists and livestock rely on for survival.

“For the last two years we did not receive any rainfall, our water sources had dried causing our livestock to emaciate and when rains came, the dry river beds flooded,” he said.

Akolong said over 500 goats and sheep belonging to more than 400 families have been killed by the raging waters.

He urged the government and humanitarian agencies to provide the necessary support to the affected families.

Johnthan Lochur, a resident of Nakaalei and a pastoralist, is among those affected by the floods. He said he lost everything.

He said  floods killed his goats and sheep that survived the biting drought.

Majority of residents in the area depend on pastoralism to support their livelihoods.

They sometimes get food aid from well-wishers, humanitarian agencies and the government when supplies run out.

“It’s almost two years that we had not received the rains. All the water sources and the pastures that we depended on to feed our animals were dried up. The animals got emaciated and some died,” he said.

“I have been struggling to access water and pastures as drought continues to bite. I normally trek for about 30 kilometres with my livestock in search of water and pastures. When it rained for two days, I thought it could bring a sigh of hope to end our sufferings. But the rains were heavy, turned to floods and killed livestock,” he said.

Lochur has called on the county government and humanitarian agencies to help.

He called on the government to start the restocking programme.

Another affected resident, Esther Etabo, said the loss of livestock will affect household incomes and payment of school fees for their children.

"We are still battling drought and hunger in the region. We don’t have food to eat. Pastures for our animals and sources of water have dried up due to biting drought. Now the floods have come and swept away our livestock," she said.

Etabo said these calamities keep them in perpetual poverty.

She appealed to humanitarian agencies and the government for relief food and restocking of livestock to enable them to survive. 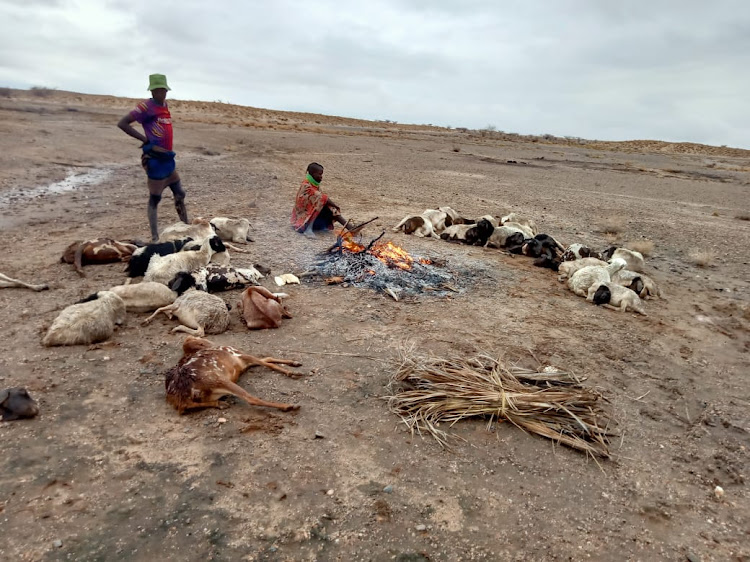 Resident of Nakaalei in Turkana South staring at the carcasses of goats and sheep killed by floods.
Image: HESBORN ETYANG

At least 640,000 people are at risk of starvation due to drought in the region, the Turkana county government said.

The county department of livestock production also said that 4,193,462 goats and sheep were at risk because of drought.

Agriculture, Pastoral Economy and Fisheries executive Philip Aemun said the drought had forced herders to migrate to new areas in search of water and pasture, making them vulnerable to both diseases, hunger and insecurity.