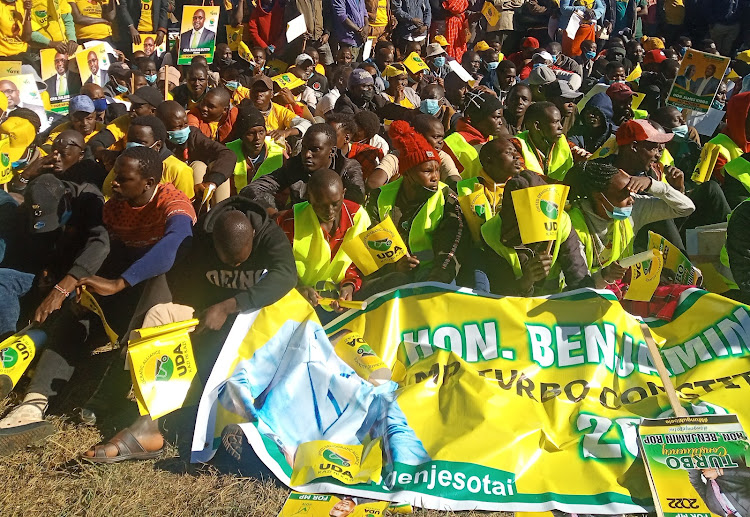 UDA primaries are promising to be a big headache in the Rift Valley where aspirants are battling for both grassroots support and DP William Ruto’s attention.

The party has attracted a high number of aspirants in the region which is Ruto’s stronghold.

Counties like Uasin Gishu, Nandi, Elgeyo Marakwet, Baringo, Kericho and Bomet have each attracted more than 700 aspirants for various elective posts as party officials say they are preparing for tough primaries.

“We will ensure the primaries are free and fair to all the aspirants. Our party has massive support but as the DP has said, no one will be favoured," Uasin Gishu coordinator Paul Kiprop said.

During Ruto’s recent rallies in Eldoret and Bomet, aspirants coloured the venues with their campaign posters and many could be seen jostling for his attention.

During introductions at the Eldoret rally, one of the governor hopefuls  asked the DP if he had seen the support he enjoys in the region but Ruto ignored him.

Most of the aspirants ferried their supporters to the venue to cheer them on as others brought wheelbarrow causing a safety risk.

Aides to the DP would be seen frantically ordering the supporters to take away the wheelbarrows.

Whenever Ruto tours the region,  aspirants have been seeking for an appointment to take photos with him so that they can post the images on social media to boost their popularity.

Despite the assurances of fair primaries, many of the aspirants and party supporters fear that the exercise may be interfered with especially in areas where the DP’s close allies are contesting for the seats.

Such areas include Uasin Gishu county where the DP’s close allies are facing each.

A  big showdown is looming especially for the governor seat in Uasin Gishu in bid to succeed outgoing Governor Jackson Mandago.

“The most important thing is for the aspirants to go out and seek support freely from residents. When it comes to primaries we will ensure they are free and fair and winners and losers will unite to make UDA even stronger," Kiprop said.

Some of Ruto’s allies in Rift Valley and Mt Kenya regions have been pushing the DP to give them direct tickets citing the role they have played in formation of the party.

But the DP has reportedly rejected their proposal insisting that all aspirants will be treated equally.