They want government institutions to work independently in enforcing the law 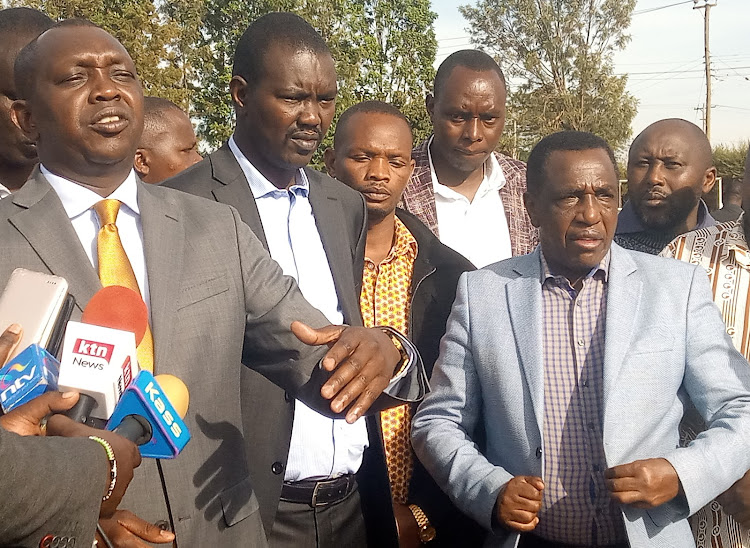 Uasin Gishu county commissioner Stephen Kihara has warned that the government will not tolerate leaders who engage in incitement and hate speech during election campaigns.

Kihara saidsecurity teams in the region are well prepared to offer necessary support to all leaders regardless of their parties.

He also warned that leaders from outside the county should not be used to incite local communities ahead of the polls.

Kihara denied claims that he was favouring certain political outfits in the ongoing campaigns.

“We have already had several leaders coming to our county for campaigns and we always give them the security support required and we will do so throughout the campaigns. I assure the public that we are fully on top of things,”said Kihara.

Kihara, who spoke at his office, said his security team will ensure the polling day is peaceful and no one will be allowed to use politics to break the law

Elsewhere, elders from the Kalenjin, Kikuyu and other communities in the North Rift have committed to ensuring that  peace and unity in the region prevails during the election campaigns.

They also want government institutions to work independently in enforcing the law as the country heads towards the August 9th polls.

“As people from this region we have already made it clear that no one will divide us because of elections. We are one people and we will remain so before and after the polls," said vice chairman of the Kikuyu community in Rift Valley Joseph Wainaina.

He said they would not accept any form of incitement in the region.

“We are happy that even the DP has come out very strongly on the issue of peace and unity and we fully support him because he is our leader," said Wainaina.

Chairman (emeritus) of the Kalenjin Elders Council Major retired John Seii also said the community elders would work with those from other communities to vouch for peace and unity.

“We have agreed that all of us will work for peace by ensuring we offer guidance to our leaders and youths ahead of the polls," said Seii.

Uasin Gishu Governor Jackson Mandago and his Nakuru counterpart Lee Kinyanjui have promised to jointly work with the peace initiatives in the their counties.

Mandago says while he supports DP William Ruto and Kinyanjui is in the Raila Odinga camp they have agreed to prioritise peace during the election campaigns.

Also in the call for peace caravan are more than 500 United Democratic Alliance (UDA) party aspirants in Uasin Gishu who met in Eldoret and resolved to engage in peaceful campaigns ahead of the party primaries and general elections next year.

They said the region should not be considered a hot spot because of past election violence and committed themselves to carry out mature, peaceful, free and democratic campaigns.

“In the meeting the aspirants have resolved that none of them will engage in incitement or use of hate speech and violence during campaigns,"

"As a party we value peace and unity of all Kenyans," said the party regional coordinator Paul Kiprop, who also chaired the forum.

Muslim Preachers and Imams in Rift Valley have also cautioned political leaders to avoid utterances that may incite Kenyans during the campaigns.

Chairman of the Imams Abubakar Bini says the political leaders must weigh their words before using them in the public.

He says some of the utterances can easily cause chaos in the country. Bini says politicians should in fact lead in preaching peace and unity during the campaigns.

Activist in court to stop hate speech charges against Onyonka

Onyonka was arrested over hate speech allegations
News
1 week ago

State urged to strengthen NCIC in fight against hate speech

A politician has suggested the government should assign police officers to the agency.
Counties
1 week ago

DPP ramps up war on hate speech with speedy arrests

The latest victim, Kericho Senator Aaron Cheruiyot is under probe over remarks in Ruto rally.
News
1 week ago
by BY MATHEWS NDANYI
Rift Valley
12 January 2022 - 22:00