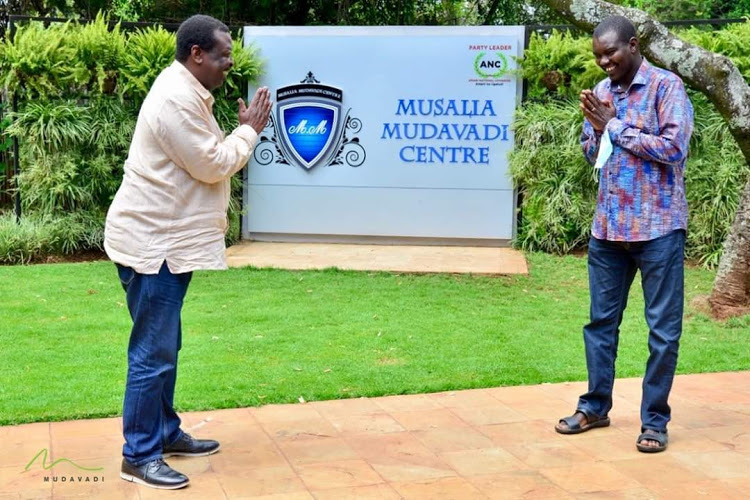 MM ANC leader Musalia Mudavadi with Governor Jackson Mandago after a meeting in Nairobi on May 22, 2020.
Image: COURTESY

Governor Jackson Mandago is playing a leading role in negotiating with key leaders, including critics in the Rift Valley, to join DP William Ruto’s camp ahead of the general election.

Two years ago, he was the first Ruto ally to visit to visit ANC leader Musalia Mudavadi at his offices in Nairobi where they discussed a wide range of issues.

“We discussed a wide range of issues which include peace, Covid-19 and the economy as we head to the elections,” a statement from the Mudavadi Centre said after the meeting with Mandago.

Sources indicate the meeting between the two leaders resulted in secret talks that that have been going on between Ruto camp and Mudavadi's.

Mudavadi has said he is free to exercise his democratic right to associate with any one.

His close ally, Senator Cleophas Malala, caused a stir when he attended Ruto’s mega rally in Eldoret, sparking speculation about possible deal between the two.

“It's now clear that Mandago foresaw the 2022 politics long ago, and that is why he was the only leader from this region who went to seek Mudavadi two years ago," Joseph Chumba, a youth leader, said.

"Mandago is an asset in DP Ruto’s camp.”

Even when Nanok was in ODM, Mandago never missed the annual Turkana Cultural Festival in Lodwar where he engaged his colleague in talks on political unity in the region.

Mandago is credited with helping have Nanok join UDA.

The Uasin Gishu governor is also credited with initiating talks with former Bomet Governor Isaac Rutto to support the DP.

Mandago had several times visited Bomet where he publicly asked the CCM party leader to join the DP.

The former governor has said he will back the DP’s hustler movement because his CCM party believes in the same ideologies, including the uplifting of the lives of ordinary Kenyans.

While other Ruto allies are said to be harsh on the critics, Mandago is known for applying diplomacy in convincing the DP’s critics.

The governor recently had a clash with Kapseret MP Oscar Sudi who asked the county boss not to vie for the Senate seat in the region but their differences were sorted out before the  mega rally in Eldoret last weekend.

Revealed: Governors' affiliation to political bigwigs ahead of 2022 polls

Raila backed by 17 governors, Ruto 10; a good governor can help, a bad one can hurt,
News
4 months ago

Says no part of the country should be off-limits.
Counties
1 month ago
by BY MATHEWS NDANYI
Rift Valley
10 January 2022 - 22:00