• Sudi wants Mandago not to vie for the Senate but the governor has insisted he will run. Sudi says others need a chance; UDA members say Mandago is uncooperative.

• They brushed aside their differences and said they would work together for the success of the DP’s mega rally in Eldoret on Saturday. 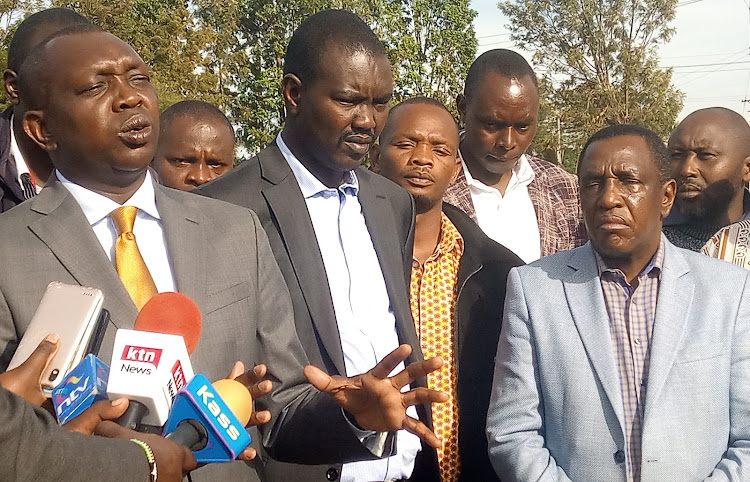 Uasin Governor Jackson Mandago and Kapseret MP Oscar Sudi have called a truce and met in Eldoret to plan for DP William Ruto's rally on Saturday.

Sudi has urged Mandago not to vie for the Senate seat and give newcomers a chance, but the governor has insisted that he will run.

On Wednesday, they both brushed off their differences and instead said they would work together for the success of the DP’s mega rally in Eldoret.

They visited the Eldoret Sports Club where Ruto's rally will be held.

“We urge all Kenyans to turn up for the rally because we know this is a cosmopolitan region and we stand for the unity of Kenyans," Mandago said.

DP Ruto is to host a major send off rally in his Eldoret hometown where elders, leaders and the local community will give him blessings to go out and vie for the presidency. He will undertake a major tour.

The event has been called the 'Mother of all Rallies' hosted so far by the hustler movement.

Ruto and more than 100 MPs will first take part in a  major street parade that is expected to bring Eldoret town to a standstill for several hours.

They will then head for the rally at the Eldoret Sports Club. At least 30,000 people are expected.

“We will ask the DP to go out there and seek for leadership and he should not be worried because as locals we will secure this region for him," Mandago said.

It will be the DP’s first major political meeting in the town since his joint campaigns with President Kenyatta during the last election.

“We will have more than 100 MPs from all parts of the country and we also welcome residents of all neighbouring counties to the rally," Mandago said.

Present were UDA patron in the county Joseph Wainaina and coordinator Paul Kiprop.

Wainana said all communities in the region had resolved to remain peaceful during the elections period and afterwards.

The leaders said from February they would launch massive campaigns for the DP in and out of the region.

“We want to ensure his win will be so big that no one will think of doubting the results," Mandago said.

There is fear of local politics playing out during the tour by the DP, with UDA aspirants already mobilising their supporters to cheer them and heckle rivals in the presence of Ruto.

Mandago and Sudi said, however, all leaders had agreed to put aside their differences and focus on the DP’s campaign.

“Our teams will go out to mobilise and ensure that as many residents as possible turn out on Saturday for the rally," Mandago said.

The DP has cancelled rallies in Elgeyo Marakwet on Friday to focus on the Eldoret meeting.

Mandago and Sudi have clashed recently after the MP told Mandago he should not run for Senate when his term ends. But Mandago has dismissed Sudi. There are fears the differences between the two could play out during Ruto’s visit.

Last week supporters of Jonathan Bii and Professor Julius Bitok, who are leading UDA aspirants in the race to succeed Mandago, clashed in Eldoret town over putting up wheelbarrow symbols bearing their pictures.

“At the end of everything, as voters you will decide  who want to vote for," Sudi said.

After the rally, they could do battle again.

At least 30,000 expected at Saturday rally at DP's home for 8-county Rift tour.
Counties
3 weeks ago

Says he will defend his seat despite pressure to join DP Ruto camp.
Counties
3 weeks ago
by BY MATHEWS NDANYI
Rift Valley
06 January 2022 - 07:10