At least 30,000 expected at Saturday rally at DP's home for start of 8-county Rift tour

• It has been called the Mother of all Rallies so far hosted by he Hustler Movement since the DP started campaigning.

• Ruto and over 100 MPs will first stage a major street parade expected to bring Eldoret town to a standstill for hours before they head for a rally at Eldoret Sports Club. 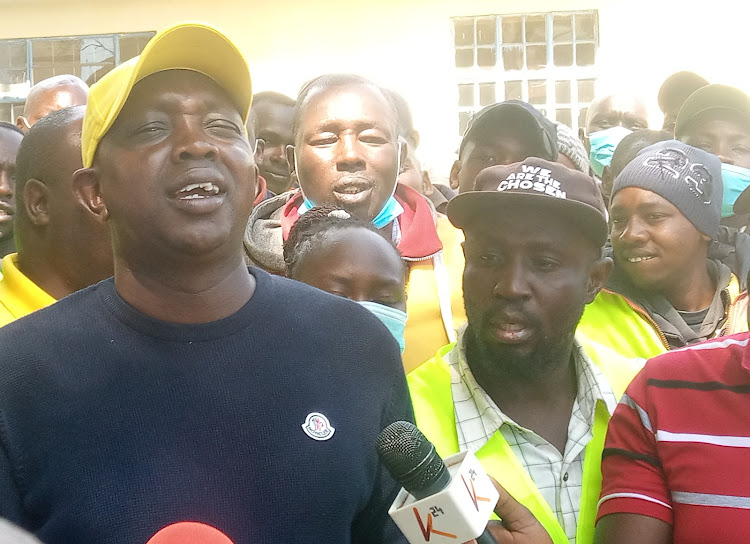 Deputy President  William Ruto will host a major send-off rally at Eldoret Sports Club where elders, where leaders and the community will bless him to run for president.

The Saturday event has been called the Mother of All Rallies so far hosted by the Hustler Movement since the DP started his campaigns. It is part of his eight-county Rift tour.

Ruto and more than 100 MPs will first parade in Eldoret in a march expected to bring Eldoret town to a standstill for several hours. They will then will head for the mega rally at the Eldoret Sports Club.

“It will be a chance for us as his home county to publicly hand him over to Kenya as he seeks presidency," Uasin Gishu Governor Jackson Mandago said.

The DP has not held any major political meeting in the town since his joint campaigns with President Uhuru Kenyatta during the last elections. He has broadened his campaign so that it is not seen as a Kalenjin-only affair.

But it is feared local politics will play out during the tour, with UDA aspirants for various tickets already mobilising their supporters to cheer them on and heckle rivals in the presence of the DP.

“We urge all aspirants, especially those for governor, to put aside their differences because this will be the presidential campaign for DP Ruto and not local politics. We can do our home politics after that," Mandago said.

Organisers aim to have at least 30,000 people in Eldoret for the DP’s tour. Mandago and other UDA leaders and aspirants met at the party offices in Eldoret on Monday to strategise.

“We have already deployed mobilisation teams to ensure as many residents as possible turn out for the rally," Mandago said.

The DP will attend rallies in Elgeyo Marakwet on Friday before being received in Eldoret on the same day ahead of Saturday.

Kapseret MP Oscar Sudi is also playing a major role in organising the Saturday rallies and he has urged residents to attend in large numbers.

During his last rally in the county on November 23 at Chebolol in Kesses constituency, the meeting was dominated by heckling of Ruto critics, including area MP Swarup Mishra. Aspirants for the governorship  also ferried supporters to heckle each other at the meeting.

Mandago and Sudi have clashed in the recent past after the MP asked the governor not to vie for the Senate seat at the end of his term. But Mandago has dismissed the MP and pledged  to run for the post.

Many UDA members say Mandago is not a team player and that he is "very stingy". It is feared the differences between the Sudi and Mandago  could play out during Ruto’s visit.

Last week supporters of Jonathan Bii and Julius Bitok, who are leading UDA aspirants in the race to succeed Mandago, clashed in Eldoret town over the erection of wheelbarrow symbols in the town bearing their campaign portraits.

Sudi condemned the incident and asked all aspirants to play mature politics. He urged residents to allow all aspirants to campaign freely. “At the end of everything, as voters you will decide who you want to vote for," Sudi said.

Ruto in eight counties campaign blitz in first week of 2022

The DP started his campaign in Trans Nzoia where he addressed rallies at 10 different stops.
News
4 months ago

They are told the only way to save their careers is to jump ship.
Counties
9 months ago