Sudi tells Governor Mandago not to run for Senate, Mandago tells him he can't run politics

• Sudi, who is serving his second term, is one of the DP William Ruto’s point men and has declared he will defend his seat on the UDA ticket.

• The MP faces tough opposition from youthful American-trained finance and biomedical technology expert Francis Murgor who is leading the pack of rivals. 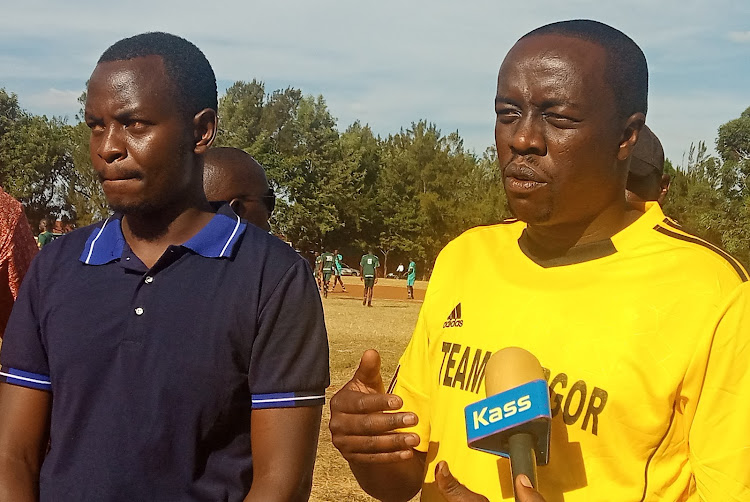 Francis Murgor (R), who is one of the aspirants in Kapseret, speaking during a youth event on December 12.
Image: MATHEWS NDANYI

Kapseret MP Oscar Sudi’s rivals are mobilising youth through empowerment and talent search activities that could upset politics ahead of the general election.

Sudi, who is serving his second term, is one of the DP William Ruto’s point men and plans to defend his seat on the UDA ticket.

However, Sudi faces tough opposition from youthful American-trained finance and biomedical technology expert Francis Murgor who is leading the pack of rivals for the ticket.

Murgor has been organising sports and other activities especially for youth.

“Youth are a major component of our population and through sports and other activities we are sensitising them to the need to keep peace during elections and also search for talents we can support," Murgor said.

He spoke at Kipkenyo in the constituency at a youth sports and sensitisation event he hosted.

Murgor urged the youth who have not registered as voters to do so when the IEBC opens mass voter registration in January next year.

“Above all we are urging the youth to ensure they keep peace and unity because we all need Kenya to be peaceful and safe always because we have no other home," Murgor said.

He has been participating in many community activities as he prepares to battle with Sudi for the UDA ticket.

“I was brought up at Langas in Kapseret and I understand the challenges our people go through," Murgor said. "That is why I have decided it's time to offer myself for election as MP so that I can work with residents to change lives."

Murgor, who has been supporting youth, women and community groups through initiatives, said he was ready to compete with Sudi and other aspirants.

“We expect free and fair primaries in UDA and I am confident the people will give me the chance to serve them as MP,” Murgor said. He has been crisscrossing the constituency readying for a bruising battle.

Murgor says he will focus on education, youth empowerment and proper use of the CDF kitty to benefit the community. He has also been mobilising residents to join UDA which he calls a mass party, not anyone's private preserve.

“We believe in DP William Ruto’s bottom-up approach to transforming the lives of our people and that is why we have been on the ground strengthening UDA," Murgor said.

All the aspirants are aggressively targeting youth who form majority of the voting blocs.

Say only IEBC should deal with elections management.
News
10 months ago

Sudi tells Mandago to go national and not monopolise Uasin Gishu politics.
News
9 months ago
Post a comment
WATCH: The latest videos from the Star
by BY MATHEWS NDANYI
Rift Valley
14 December 2021 - 22:00
Read The E-Paper