Says no part of the country should be off-limits

•Mandago says the country will emerge stronger from the polls if Kenyans will ensure peace and unity prevail.

•He says presidential aspirants should visit all areas of the country and sell their policies and plans.. 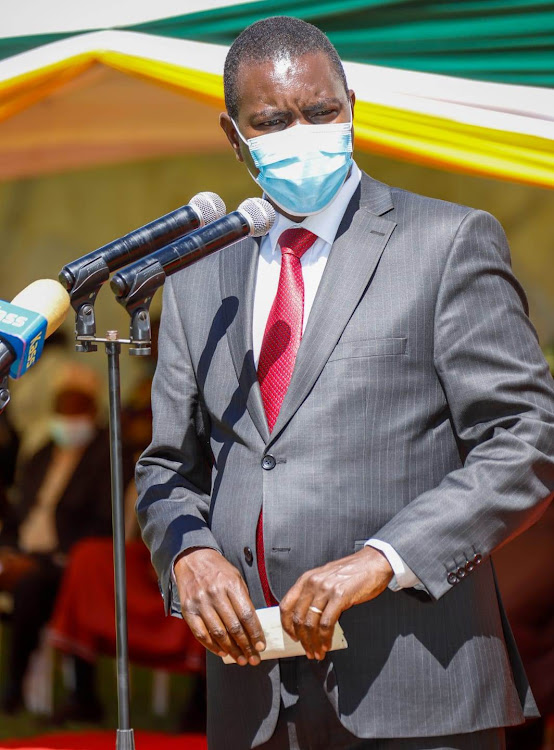 Governor Jackson Mandago has urged Kenyans to allow everyone, especially presidential aspirants, to campaign freely countrywide without booing or violence.

The country will emerge stronger from the polls if Kenyans  ensure peace and unity prevail, he said on Wednesday.

He said the presidential aspirants should also ensure they visit all areas of the country and sell their policies and plans.

“As Kenyans, our work should be just to listen to them and know what plans they have for us. We do not want to see incidents of heckling or violence because that is primitive politics," Mandago said.

The county boss who spoke at Moi’s Bridge said ODM chief Raila Odinga and ANC leader Musalia Mudavadi have recently campaigned in Eldoret without any disruption. He called that a sign of mature politics.

“That is what we want to see everywhere in the country. Let politicians come and talk but as voters we will decide where to take our votes. There is no harm in just listening to the political leaders and then voting for whoever you want later," he said.

Mandago is spearheading a peace campaign in the region that he says will remain peaceful during the elections period.

He says Uasin Gishu, Nakuru and counties under the North Rift Economic Bloc will partner on peace and unity initiatives ahead of the polls.

Mandago and Nakuru boss Lee Kinyanjui will jointly lead the peace initiatives in the their neighbouring counties, despite their political differences.

Mandago supports DP William Ruto while Kinyanjui is in the Raila Odinga camp bu both agreed to prioritise peace.

Two weeks ago more than 500 United Democratic Alliance  party aspirants in Uasin Gishu met in Eldoret and resolved to engage in peaceful campaigns ahead of the party primaries and the general election next year.

They said the region should not be considered a hot spot because of past election violence and committed themselves to  mature, peaceful, free and democratic campaigns.

“The UDA aspirants meeting resolved that none of them will engage in acts like incitement or use of hate speech and violence during campaigns. As a party we value peace and unity of all Kenyans," party regional coordinator Paul Kiprop said. He chaired the forum.

Mandago has has urged them to ensure they talk about peace and unity.

Aspirants said they expect free and fair primaries, with no one favoured by the party or its leaders.

Also present was patron of the party in Uasin Gishu, Joseph Wainaina.

"My interest is to see peace and unity in our county and I am happy that all aspirants have pledge," he said.

The party also invited officials of the IEBC, NCIC and Registrar of Political parties to frequently sensitise the aspirants and residents ahead of the polls.

“The aspirants have clearly stated that they also expect fairness from the government agencies that will play a role in handling the general elections," Wainaina said.

Mandago backs DP Ruto,Kinyanjui supports Raila but their common cause is election harmony.
Counties
10 months ago

•The forum of more than 500 aspirants discussed party primaries, which will be highly competitive in the region that is home to DP William Ruto. • ...
Counties
10 months ago
Post a comment
WATCH: The latest videos from the Star
by BY MATHEWS NDANYI
Rift Valley
09 December 2021 - 22:00
Read The E-Paper